Graphic novels about golems and more

THE GOLEM’S VOICE by David G. Klein is set in 1943 Prague, as pre-teen Yakob becomes separated from his family as they’re deported to a concentration camp. Wandering into the synagogue of Rabbi Judah ben Loew, Yakob reanimates the Golem and uses him to protect a small band of refugees in the nearby woods. Meanwhile, a German commander seeks to capture the Golem, learn its secrets and exploit its power for the Reich. This is okay, but suffers from having too many deus ex machina moments (ben Loew’s spirit intervening to move the plot along). 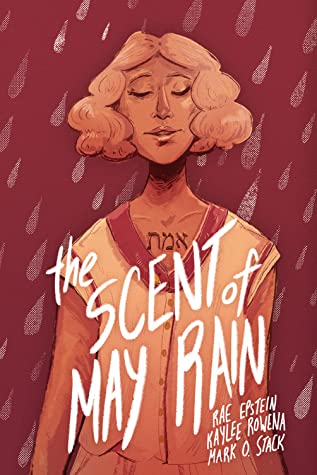 THE SCENT OF MAY RAIN (done as a Kickstarter) by Mark O. Stack and Ray Epstein with Kaylee Rowena on art worked a great deal better; it’s also unusual in having a new golem rather than resurrecting the Golem of Prague. In 1920, a Jewish professor brings a female golem to life because his little girl needs a mother. She’s bound to serve and obey, but at the same time she has her own independent spirit, which leads to her becoming the superhero Amazon in WW II (an obvious hat tip to Wonder Woman being born from clay). But what does she truly want for herself? A lesbian golem freedom fighter/mother stands out from the pack, and it’s actually good as well as unusual.

THE TERRIFICS: Meet the Terrifics by Jeff Lemire and various artists was DC’s attempt to riff on the Fantastic Four (I believe this came out when Disney didn’t have film rights to the FF so like the X-Men the comics pushed them aside). Mr. Terrific, Phantom Girl, Metamorpho and Plastic Man are bound together as a team when energy from the Dark Multiverse makes it impossible for them to stay far apart. Can they work together? Can they find a solution? Who is this Tom Strong sending them warnings (I must admit I feel sorry for Alan Moore at seeing yet another of his creations brought into the DCU)? I wasn’t blown away, but I’ll buy V2 eventually.

SUPERMAN’S PAL, JIMMY OLSEN: Who Killed Jimmy Olsen? by Matt Fraction and Steve Lieber is a frustrating book. The premise is that Jimmy — largely the same goofball as the Silver Age, though with a wealthier family — has become the Daily Planet’s financial lifeline due to the insane online traffic generated by his nutty adventures. Then someone kills him, but why? Is it the wife he acquired during a drunken party in Gorilla City? Luthor? Can he survive long enough to find out?

It’s a great premise and the plot is fun, but the execution suffers. Fraction’s writing is way too cute and this bounces around in time to the point Pulp Fiction looks linear.

universe, meets Deadman, fights off aliens, thwarts a deranged millionaire and battles a reckless superhero in Detroit, all with some wild art by Aparo, who seems to be channeling Ditko in some of the subatomic scenes. I really dislike that Mera gets to do nothing but wring her hands and worry (as I’ve mentioned before, Dick Giordano sidelined her as soon as he became editor) but overall this was a good volume (courtesy of my bro, as a Christmas gift). Steve Skeates subsequently adapted an unused Aquaman script for another comics company and gave the last Aquaman issue a sequel at Marvel to boot.

So as usual for the end of the month, Leaf articles dried up (it has something to do with their billing cycle with clients) and I had the whole week to work on my own projects. I don’t always make good use of the time, but this week? Totally.

I made final edits on Chapters One and Two of Undead Sexist Cliches. Chapter Two was slower than I thought, but I think I’ll make up the time on the two rape-cliche chapters — they’re the most tightly organized.

I wrote another chapter of Alien Visitors and watched some more films.

I did some more research reading.

I worked a little on drafting my golem article.

Despite having Wisp in most mornings, I managed to keep up my exercise schedule. And believe me it’s hard when a cat curls up next to you on the couch and wants petting.

And I submitted Southern Discomfort to a new publisher. I feel pessimistic, but it’s not doing any good just sitting here, is it? The pessimism isn’t that I think the first three chapters are poor — I reread them and other than a couple of spelling errors, they look good. But it’s kind of an odd book, with multiple POVs and I wonder if the publisher (or any publisher) will just look and say it’s not strong enough or we need more time with Maria’s POV or something. But hey, self-publishing is always an option if nothing else works. And I’m not giving up on trad publishing yet.

Huh, that’s actually a shorter summation of the week than when I’m writing about how wrong everything went. But I’m cool with that.

#SFWApro. Cover by Ernie Chan, all rights to image remain with current holder.

Edited by Michael Stein, ALIEN INVASIONS!: The History of Aliens in Pop Culture caused me a sliver of anxiety as it covers similar terrain to Alien Visitors; fortunately it’s different enough from what I’ll be doing I don’t think it’ll kill my market.

This is a big-picture book running from 19th century pre-War of the Worlds stories of alien visitors through the silents, the pulps, comics and movies of the 1950s on to the more recent works such as Arrival. This would be more useful to someone starting from scratch — even before Alien Visitors my knowledge of this subject was well above average — and some of its conclusions (the Invaders From Mars sucking people into the Earth to enslave is a metaphor for Commie propaganda!) are just daft. It also suffers from the lack of an index which makes it inconvenient when looking for something specific such as Algol. More lavish in its illustration than I’ll be able to afford, though.

I recently started work on a paper about golems in specfic, to be published in an academic book on the subject. As part of that project, I read THE GOLEM OF HOLLYWOOD by Jonathan Kellerman and his son Jesse Kellerman. Back when I read a lot more mysteries I always enjoyed the older Kellerman’s work but this book is a mess.

The story gives us two alternating and apparently unrelated narratives (I don’t think anyone will be surprised they tie together eventually). One concerns Jacob Lev, an alcoholic former homicide cop demoted to traffic detail. To his surprise he’s suddenly transferred to Special Projects and assigned to investigate a head found without a body. It turns out the head belongs to an infamous serial killer, so who did him in? In the other plotline we follow Asham, the sister of Cain and Abel, torn between which of them to marry. Eventually, she dies and bizarrely becomes the soul force poured into the Golem of Prague. Who is still around, in a much-mutated form — rather like a comic-book shapeshifter “Mai” can become an oozing wave of mud or a swarm of giant beetles.

Compared to this mess, Marvel’s Golem was Watchmen. At 500 pages the murder investigation is unbelievably tedious and the Bible stuff isn’t much better — do we really need such a cumbersome origin for the Golem of Prague? The ending is a mess, even given it’s explained in the sequel. The only thing I liked was that Jacob’s a high-functioning alcoholic, still drinking but able to do this job. I’ve read a lot of fiction where becoming alcoholic Monday means you’re living in the gutter by Wednesday; some alcoholics manage to keep the balls in the air a lot longer.

The sequel, THE GOLEM OF PARIS was marginally better for making sense of the mythos: Special Projects is actually run by Nephilim who use Mai as their executioner. Only now she’s out loose so they need to destroy or contain her again, particularly as the Russians are now hunting her for their own use. Better, but not good — this is another long book with another uninteresting murder mystery. I’m just glad there’ve been no more sequels since this one.

#SFWApro. Cover by Ernie Chan; all rights to images remain with current holders.