A golem of rags? Ragman, original and rebooted

Ragman is probably best known as a member of Team Arrow on the CW’s Arrow. He’s never been more than a B-lister in comics, but I recently reread his original, oh-so-forgettable 1976 series and the 1991 reboot. This is one of those cases, like Hawk and the Dove, where the remake surpasses the original. 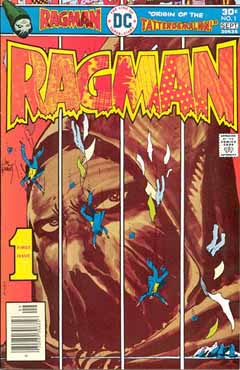 As detailed in Ragman #1, Rory Regan is a Vietnam veteran working with his father in the Rags ‘n Tatters junk/pawn shop in a inner-city slum. Rory’s reporter girlfriend Bette wishes he’d put his brains to work in something more professional, but Rory’s always loved his father’s trade, despite the way other people look down on them. He also knows Rags ‘n Tatters is a lifeline for the community: his father’s always giving people more than their junk is worth, just to keep them afloat financially a while longer (how does a guy with no money himself make this work? No answer).

One evening, dad is drinking with his friends — former acrobat, former prizefighter, former circus strong man — when they discover an old mattress in the junkyard stuffed with a million bucks somebody hid for safekeeping. Dad figures he’s made Rory’s fortune, but then a mobster shows up looking for the money. When Regan Sr. refuses to give it up, the mobster sets a trap using convenient high-tension wires; when Rory comes home from a date, the mobster tells him to give up the money or Daddy dies. Rory can’t help as he has no idea the money exists; the hood springs the trap, Rory tries to rescue his father and the other men, but only winds up almost getting killed along with them. He survives, and apparently gets the strength, acrobatic skill and boxing skill of his father’s three friends transferred. Donning an outfit Dad bought for Rory to wear at a costume party he hunts down the crooks. Then the “Ragman” (the costume doesn’t look particularly ragged, except for the cloak) begins waging war on the predators who victimize his friends and neighbors.

The art — Frank Redondo using breakdowns by Joe Kubert (who did the covers as well) was memorable, the stories by Robert Kanigher not so much. The origin is old-fashioned, the villains are generic gangsters and drug-dealers and the characters are stock. Rory’s noble and suffering, Bette’s constantly nagging and Opal — a black singer with the hots for Ragman — is sexy. The emphasis on Ragman fighting for the down-and-out has given the series some fans, but rereading didn’t change my initial reaction when I bought these on the stands: meh. When it closed after the fifth issue, I didn’t miss it. 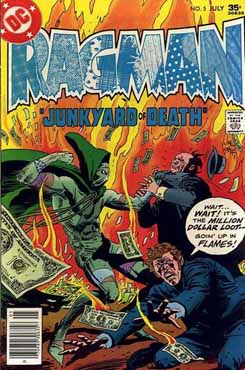 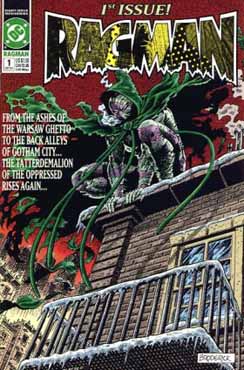 The reboot, cowritten by Keith Giffen and Robert Loren Fleming with art by Pat Broderick, was far more memorable. It also makes good use of golem lore. The set-up is similar: Rory’s a Vietnam veteran helping out at his dad’s shop, though Bette is now a homeless vagrant — the neighborhood’s even more down and out than before. When a drug ring tries to use Rags ‘n Tatters for their business, Regan Sr. refuses; they kill him, put Rory in the hospital and have his “aunt and uncle” take over the store. There’s nothing Rory can do about it until he sneaks into the store and discovers a strange, patchwork costume (it really does look raggedy) hidden in his father’s closet. When he puts it on, he’s transformed: stronger, faster, more agile, and the costume — it’s self-aware in some fashion — can suck out the souls of criminals like the faux relatives running the store. Rory is now the Ragman, with the power to find out what’s behind Dad’s killing and to help the people in his community (now located in Gotham City).

Then a Rabbi shows up. He reveals Rory’s dad was Jewish — Reganowitz — and that the ragman suit is the product of kabbalistic mysticism. After Rabbi Judah ben Loew created the Golem of Prague, other mystics grew uneasy about using a soulless creature to protect them. Using the same rituals they created the Ragman costume; it’s effectively a rag golem but requires a human wearer to animate. Rory’s dad was the last one to wear it, in Warsaw during the uprising against the Nazis. When the ghetto became consumed by fire — the one thing the rags can’t handle — and it became clear there was no hope of winning, Rory fled. Burdened by guilt, he hid the rags away and never wore them again.

The rabbi begins training Rory because the rags are dangerous. They do indeed drain the souls of his foes (along with adding a piece of their clothes as another patch) and the accumulated evil urges the wearer to turn Punisher rather than protector. Complicating things is that during the years the suit was quiescent, the Rabbi created a new golem as a protector. In the years since, it has gone from a formless figure to human in appearance; it can see its way to gaining a soul and the ability to speak (golems can’t speak because of their soulless state; it’s what distinguishes the creation of a golem from God’s creation of Adam). Now that the suit is back online, the mystical energy that empowers them both is flowing out of the golem and into Ragman. The golem arrives in Gotham City determined to destroy his rival and secure his future.

In the end, it doesn’t work out that way. Bette befriends the silent drifter and at the climax of Rory’s battle with the suit erases the “E” from “EMETH” on the golem’s forehead (from “life” to “death” in effect). With the golem gone, his life force enables Rory to wear the suit, instead the suit wearing him. He goes on to settle things with the criminal mastermind behind everything, and then confronts Batman. In that final issue, Ragman reflects on the many things he’s done to help people in the community, and they, in turn, stand by him. With the neighborhood united, Ragman floats off on the wind to further adventures, starting with Ragman: Cry of the Dead (the golem managed to return for that one too).

It was a great reboot, with stronger characters, a more interesting Ragman and some memorably weird touches, such as the street gang The Mimes (“If you wear clown white in this neighborhood, you must be tough.”). And obviously, it earns a place in my golem article.