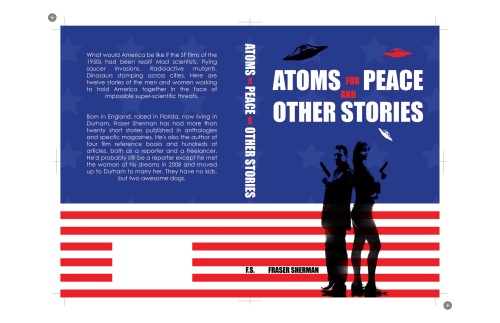 Atoms for Peace collects the ten stories that appeared on Big Pulp almost a decade ago, plus two stories that never showed on the web site. It’s the 1950s, but the SF movies of the era are real: mad scientists are performing sinister and dangerous experiments, the National Guard battles radioactive mutants and alien invaders and pod people threaten humanity’s control of the world. Available at Amazon as an ebook and paperback and at other retailers as an ebook.

Atlas Shagged (A Parody) and Other Comedies collects five stories: Atlas Shagged, The Wodehouse Murder Case, Dark Satanic Mills, The Sword of Darcy and Uneasy Lies the Head That Wears the Clown.  You can find it in several e-stores via Draft2Digital. The hard copy version is available on Createspace with added stories: Learning Curve, Red Moon Rising, Original Synergy and Jack Be Nimble.

Below are links to all of my uncollected fiction available online. You can find backstories on how I came to write them here.

Altered Reality just republished Heads Up. He needed clean clothes. Then the head in the washing machine started complaining

Buckshot Magazine has published A Many Splendored Thing. Learn what it takes to be a goddess of love in the 21st century.

The Grass is Always Greener appears in the Strange Economics anthology. Reed thought his failure was just a lack of talent and a bad economy. Then he learned someone had stolen his future away. But how? Why? And can he get it back? Available from Amazon as ebook and in paperback. 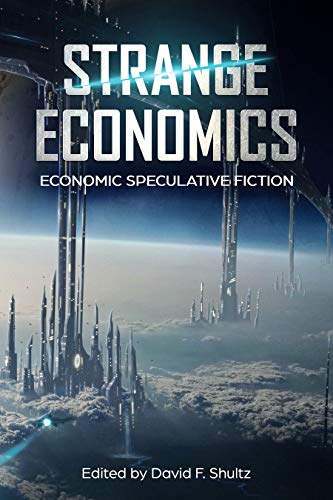 •Backstage With the Hypothetical Dead is now out from On the Premises. Working backstage on community theater is not a convenient place to see a ghost. Or was it a ghost?

•Philosophy and Fairy Tales is my short-story collection, available from Smashwords, Barnes & Noble, iTunes, Sony as well as other sites. . It includes Red Moon Rising, Jack Be Nimble, Learning Curve (somewhat edited) and a heavily reworked, much-improved version of Original Synergy. I’ve dedicated a separate page to the book here.

•Signs and Hortense is in the Eldritch Embraces anthology of Lovecraftian romance. In a world where worship of the Old Ones is the mainstream religion, a repressed young woman waits impatiently for the End Times to come … and sees signs of Nyarlathotep in the Publix produce section. Available from Amazon.

•My supernatural murder mystery, Kernel of Truth, is live at Kzine. When a senator is murdered, the obvious villain is a crazed ecoterrorist. A powerful corporation would like the case closed fast. Can a security chief and a homicide cop unearth the real story?

•My next-to-newest short story, Leave the World to Darkness, is in Love, Time, Space, Magic, an anthology of romantic specfic. It’s the 1930s and Aggie Baxter’s dragging her perpetually bemused boyfriend along on what she thinks is the scoop of a lifetime. But she’s not prepared for a story that involves Tom Edison, Nicola Tesla and shadows that kill. Also available at Amazon.

•And He Bought a Crooked Cat, is out in the Rejected anthology. What happens when a stuffy, never-takes-a-chance writer finds himself surrounded by Humpty Dumpty, Mary Quite Contrary and three little kittens?

•My next most recent story, Affairs of Honor, is out on Abyss and Apex. In post-Revolutionary War Boston, a man learns his son is about to die in a wizard’s duel.

•The Happiest Place on Earth is now out from New Myths. See what happens when beloved movie-maker Walt Alhazred decides to cancel that classic madness-inducing show, The Mickey Mi-Go Club.

•Number of the Least is available in the fourth issue of Fever Dreams. What happens when a total loser tries to become the Antichrist?

•Peace With Honor is available in the 2012 anthology, Monster Earth. In a world where kaiju are the ultimate weapons, what happens when America’s monster goes head-to-head with the creature attacking our troops in Vietnam?

•My second Monster Earth story, The Fox and the Hedgehog, is out in Betrayal on Monster Earth, available in paperback or Kindle. An unkillable monster threatens to destroy the Soviet Union. Can an American scientist nudge the US and the USSR toward peace by finding a way to destroy the indestructible?

•I Think, Therefore I Die, now out at Sword and Sorcery. A follower of Rene Descartes’ mathematical mysticism battles the Man in the Iron Mask and his evil mastery of calculus! Strangely enough, it’s not a comedy.

•In The Wodehouse Murder Case a high society mage with a secret finds himself falling for his best friend’s girl. Then everyone ends up trapped at a country house party with fog cutting them off and a killer among them! A comedy. It’s in Atlas Shagged, and here’s me reading it aloud at Illogicon 2017.

•Others Must Fail from the first issue of Semaphore is available for free via Lulu. Can determination and a positive outlook really overcome luck?

•Everybody’s Doing It: Allegory archives(scroll down to 2007). What if your actions set the moral tone for the world? Sc

•The Sword of Darcy is in Atlas Shagged but it’s also available in the More Scary Kisses anthology. It’s Pride and Prejudice with Conan of Cimmeria in the Darcy role.

•Original Synergy is available in Chaos Theory.
-What happens when all the world’s conspiracies try to work out their disagreements?

•Uneasy Lies the Head That Wears the Clown is in Atlas Shagged but also available as a podcast on Drabblecast. A Wall Street titan wakes up one morning and discovers he’s a clown. Literally.

•One Hand Washes The Other came out in 2009 at Abyss and Apex. To win his ex-girlfriend back, Ryan agrees to do one small favor for a wizard. The favor’s bigger than Ryan expects, and reveals a truth he didn’t know was there.