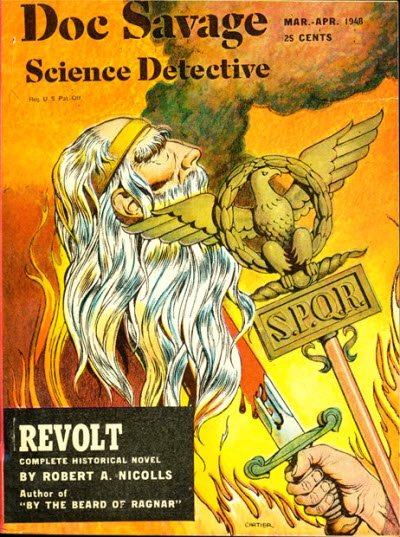 We’re still in the Doc Savage, Science Detective phase, which may explain why THE PURE EVIL is such a dull yarn — though not why Edd Cartier’s cover doesn’t illustrate or even mention Doc’s adventure.

This one opens with Gail Adams (while Gail isn’t another first-person narrator, she does get most of the POV) driving her brother Dan to his work as a radar operator. Something he sees on-screen drives him to smash his equipment and then go to church. Later in the day, he’s found strangled in his locked room; the supervisor, who might know what Dan saw winds up dead the same way. A Mr. Morand (no relation to the man in Danger Lies East I assume) with a weird speech pattern (“Your brother. Most unfortunate. Very sad.”) offers Gail a life insurance payoff, double indemnity in case of suicide, which Gail deduces is to stop her asking any questions. Instead, Gail calls Doc, then flies to New York when it appears he won’t take the case otherwise.

One of the passengers tries to kill her in an effectively chilling scene (though not as effective as Colors for Murder). Fortunately Doc and Monk have snuck aboard and save Gail, but the man impossibly vanishes. Morand, also aboard, explains the killer is one of several evil entities his research has manifested, though he insists they’re scientific forces, not supernatural.  As more weirdness happens, a trio of wealthy debunkers recruit Doc to prove Morand is full of crap.

It’s a decent set-up but mediocre execution. Doc being a science detective is presumably why we get a long, detailed search of the plane with lots of technical detail about where he could be hiding; I didn’t need it. The big reveal is a talky scene in which Renny reports to Doc what he learned eavesdropping on Morand’s gang: this is all a scam to earn money for his “research” from the wealthy trio. Although we gets some old-school elements like anesthetic grenades, this ultimately turns out to be a generic detective novel.

The curiously titled TERROR WEARS NO SHOES shows how the zeitgeist was changing: coming out in 1948, it presents the USSR (not specifically named, much like pre-war novels such as The Rustling Death didn’t outright label the villains as German). Russia has perfected a bioweapon it plans to introduce into America, the first step in WW III. In contrast to the 1950s political paranoia where commies were infiltrating America to destroy us from within (something I covered in Screen Enemies of the American Way), Doc declares that communist infiltration has proven worthless, hence the turn to open warfare.

The story opens with Doc, in disguise, trying to impress Canta, a female crimelord in the mold of Crockett from Danger Lies East. While we’re told she’s powerful and a legend in the Far East, once she joins forces with Doc — she gave the U.S. the pseudonymous tip-off about the plot — she comes off rather ineffective, a typical woman out of her depth. Crockett was more fun.

Much of the plot concerns a hunt for Long Tom, who was investigating the conspiracy. We learn Long Tom was largely absent from Doc’s WW II adventures because he was working on the Manhattan Project; now he’s disappeared again, and the Russians believe he’s dead. Nope, he actually killed the ruthless Soviet agent sent to eliminate him, then successfully assumed his identity. Unfortunately I guessed this trick well before the big reveal.

This wasn’t as bland as its predecessor — despite how the book treats her, Canta’s pretty cool (I would so love to see a fanfic with her, Pat, Retta Kenn, Rhoda Haven and Crockett all working together). However Dent spends a lot of time warning us about the unspeakable evil of the international communist threat (which as usual comes off interchangeable with the recently defeated Axis) and that’s old hat (and a dull hat) to me.

THE ANGRY CANARY starts in a package depot where a weird-looking dude (“he wore a green suit of a shade hitherto unheard of.”) and a good-looking woman both 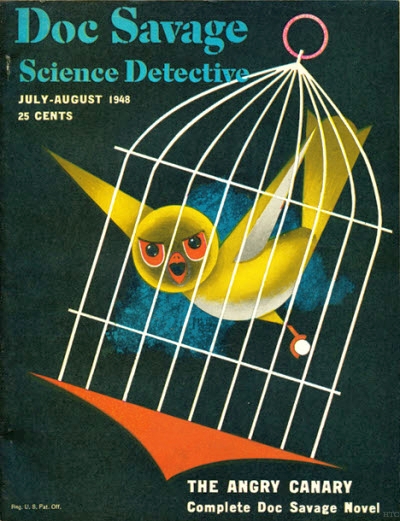 attempt to pick up a canary cage without a claim ticket. The clerks on duty, refuse, but then hear the canaries fighting inside the cage until of them kills the other. Meanwhile, someone sends Doc half of a $1,000 bill and the claims ticket. After Doc uses his science detective mojo to deduce the person who sent the envelope is a woman, smokes exotic cigarettes, has recently returned from India, etc., Doc sends Monk to pick up the cage — though by the time they finally get it, one of the clerks has lost his life.

Analyzing the birds’ brains, Doc discovers they’ve been altered: they fought because something stimulated them to hate each other. Margaret Prince (the woman who sent the envelope and tried to collect the cage) eventually explains that she’d been working at her missionary uncle’s establishment in India when it became obvious something was whipping up Hindu/Muslim hostility far more than normal. The villain is sinister Mr. Plott (green-suit guy) who’s figured out a technology that stimulates rage and hate (Doc tells Prince about his crime college to confirm this is indeed possible). This idea works much better than it did in The Screaming Man.

The novel also works in one nice twist: Audrey, the blonde Monk and Ham have been fighting over for a while, insists on horning herself in on the adventure. It looks like she’s more than the brassy blonde she initially seems to be, and she is, but not the way I expected. Rather than an excitement junkie, she’s Plott’s wife, infiltrating herself into Doc’s circle when they realize Doc’s probably going to get involved. The results are not classic, but they are enjoyable.

2 responses to “Doc Savage vs. evil, terror and hate!”