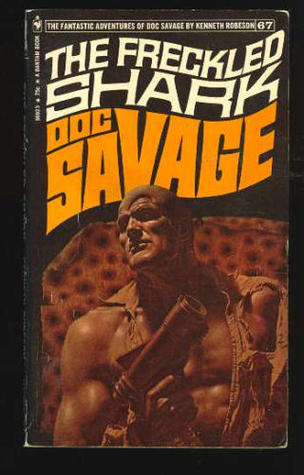 THE FRECKLED SHARK is named for one of the worst McGuffins ever, a piece of freckled sharkskin everyone’s hunting for. Characters keep gaping and saying there are no freckled sharks, but that doesn’t make it intriguing (ultimately it turns out to be a map—the freckles are all that’s left of the ink)

This would actually be a better book if Doc & Co. weren’t in it (and Doc’s not in it much, sort of. You’ll see). We have mild-mannered soldier-of-fortune Tex Haven as the lead, a guy who like Rick Blaine in Casablanca used to run guns to the anti-fascist, communist side in the Spanish Civil War, and munitions to China after Japan seized Manchuria. He’s also financed and organized a revolution in oppressed Blanco Grande. Unfortunately the new leader, Señor Steel, has turned the country into a hellhole instead of a democracy, funneling the money Tex raised into his retirement fund. Tex and his daughter Rhoda want to find his stash, which is hidden in the Florida Keys along with several kidnapped pro-democracy leaders.

Rhoda is a striking character too, an archeologist/virologist/government-administration expert and future Nobel Prize winner. In a standalone book she might actually have used her skills, but not here (she doesn’t recognize Johnny, the world’s greatest archeologist, or have any knowledge of Doc’s landmark medical work—that makes her less interesting than some of Dent’s other super-competent women). Her role is to lock horns with Henry Peace, the third protagonist. Peace — “Don’t let the name mislead you” — is a two-fisted redhead who proposes to Rhoda when he meets her and keeps proposing throughout the book.

Peace is also Doc Savage, disguised to find out what’s really going on. Doc’s played that game before, but here it becomes a way for him to cut loose. He slugs Monk, rips up Ham’s new suit (I guess he found their constant arguing more annoying than he let on) and flirts outrageously with Rhoda (he’s quite horrified to realize that when she found Peace Obnoxious and Irritating, it was just a prelude to falling in love with him). He admits there’s a part of him that would really love to be Henry Peace and not Clark Savage Jr. (it’s a continuation of the humanization we saw in The Devil Genghis). It’s the one thing that makes this a standout as a Doc Savage adventure.

On the minus side of the scale, there’s a tossed-off reference to a character running like a “pickaninny” who heard a scary noise in a graveyard. It’s a painful and unpleasant line to read. 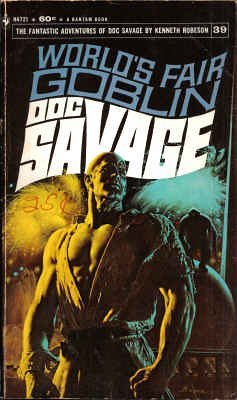 When I first saw the title of WORLD’S FAIR GOBLIN (written by William Bogart based on Lester Dent‘s outline) I assumed it was about a blond (i.e., fair-haired) monster. Instead it’s about a goblin at the 1939 World’s Fair in New York, a headline-grabbing event back in the day. I don’t know if that boosted sales any but it must have been a kick for readers to see Doc performing a surgical demonstration (ground-breaking brain surgery technique), or have characters slipping into the Trylon and Perisphere (shown to the right of Doc on the cover) or get factoids about the miles of water and electrical tunnels running underground at the fair.

Against this background we have the appearance of Maximus, an eight-foot tall hulk strong enough to carry Monk away like a baby. The product of a mad scientist’s experiments in creating “the Man of Tomorrow,” Maximus is capturing more prisoners for his master to experiment on: the scientist claims that while Max became a super-strong moron, someone as brilliant as Doc’s aides would have brains and brawn.

As it turns out, this is a cover story. The real prize is a suitcase size battery capable of storing the entire output of the Niagara Falls power plant; the Perisphere has been designed as a super-generator capable of charging the battery. The villain wants it, possibly for its industrial potential or maybe as a tool of evil (there are several references to how it could suck up enough power to black out a city. This is a straightforward action/sf pulp adventure and overall a better one than The Freckled Shark (though Henry Peace makes up for a lot).

Covers by James Bama, all rights to current holder.