Doc Savage’s Women: Let’s Kill Ames, Once Over Lightly, No Light to Die By

This trio of yarns, running from late 1947 to 1948, wraps up the string of first-person narration that began with No Light to Die By. They’re also the first to appear under the magazine’s new label, Doc Savage — Science Detective. It’s an oddly retro title, as Science Detectives using forensics, lie detectors and other methods had been a thing 40 years earlier (Craig Kennedy being one of the best known), but as Will Murray says the editorship at the time was experimenting with new ways to boost sales. I think the weird-looking cover below must have been part of that (all three covers are by Walter Swenson) 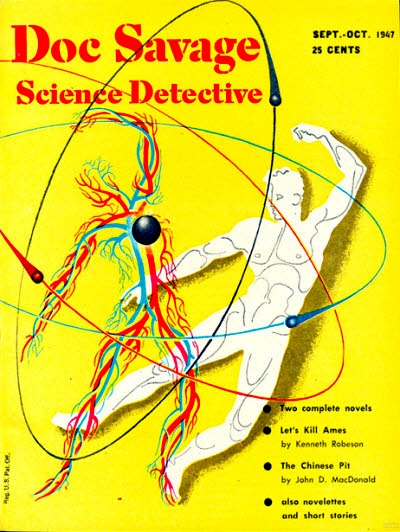 The narrator of LET’S KILL AMES is Ames, specifically Travice Ames, one time professional chemist turned grifter. As the story begins, her hotel discovers her history of skipping without paying and locks up her rooms. With no other options, she reluctantly allows persistent suitor Nat Pulaski (he’s short. Ames hates short men) to take her out to dinner. Under the influence of a lot of liquor Pulaski lets slip that he’s onto something big: someone is paying him big money to provide a slow-acting poison that the someone will slip to three men; either they pay for the antidote or they die. The treatment is radioactive and Ames remembers the case of the radium girls from a couple of decades earlier, grounding the idea in reality. Nevertheless she figures Pulaski’s just talking big and there’s no real scheme. However this gives her the idea to con one of the men by making it look like he’s been poisoned (she has the chemical know-how) and then offering to find a cure.

Oops. Turns out the poisoning is real, which doesn’t make the dude very happy (“his hands began picking up ruling pens, protractors and rulers and laying them down again without his hands having told him what they were doing. His breathing was hard and audible, like someone sandpapering a bone.”). Ames isn’t too happy either when people start trying to kill her with cyanide. Her solution is to call Doc Savage, figuring she can con him into helping her — he can’t be as savvy and tricky as his press clipping say, right? Suffice to say Ames comes through alive but she doesn’t walk out with a cash bonus.

It’s a fun story and does play up the CSI aspects of Doc’s investigation. The next two novels surprisingly don’t make him any more of a science detective than usual.

The woman narrator of ONCE OVER LIGHTLY is Mary Olga “Mote” Trunnels, who does office work for a PI firm. At least she did until he screwball BFF Glacia calls and demands Mote visit, with promises of a fabulous job and an atypical offer to pay for Mote’s ticket. Mote waits for her paper-pushing boss to do something stupid, makes a big stink out of it when he does, and gets fired, thereby eliminating any need to give two week’s notice. She arrives at a very bizarre, contemporary-styled hotel she describes as the kind of thing an artist would draw for a story set on Mars. Awaiting her is another Dent’s Native American sidekicks a la Secret of the Su and The Goblins, though “Coming Going” turns out to be a federal agent undercover in redface makeup. Shortly after Mote arrives, Glacia’s uncle is murdered. Mote realizes Glacia was hoping she had enough PI experience to help with whatever she’s enmeshed in, which involves a mysterious inheritance and something called “Keeper.” But wait, Doc Savage is passing through town — any chance he can help? 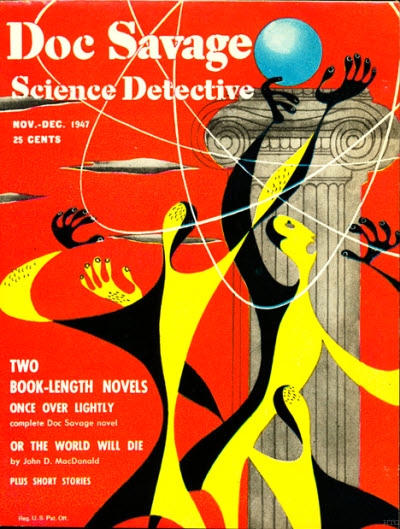 Turns out Doc’s already on the case. The inheritance is the location of a ship that went down with a boatload of processed, atom-bomb ready uranium, “enough to be worth the destiny of several nations.” That’s a very lucrative McGuffin and some very nasty people are, of course, after it. Not bad, and Mote’s a fun narrator, though not as interesting as Travice.

The third novel, I DIED YESTERDAY is Pat Savage’s swan song and gives her the narrator’s role. It opens at Patricia Incorporated, Pat’s ultra-chic, ultra-expensive spa. Miss Colfax, the ice cube who presides over the front desk and makes getting  appointment is tougher than being presented to the King of England (the customers pay more because they know they’re an exclusive breed) informs her boss that the young man who just came in is more than she can deal with. Surprised, Pat meets the guy and discovers he has an icepick wedged deep in his back, handle broken off so it can’t just be pulled out. Pat knows if she calls Doc in on whatever’s happening he’ll insist on keeping her out of it so she arranges for her on-call surgeon to treat the guy. He, however, says it requires Doc’s touch — and sure enough, Doc wants Pat safe, especially when he learns there’s already been shooting (someone trying to finish the job on the ice-picked guy). He and Monk waste time trapping Pat and making her think it’s the bad guys doing it so that she’ll stay in the trap. Doesn’t work, of course.

The plot turns out to involve plant biochemistry, a scientific secret worth a fortune and Lucia, a mystical woman convinced destiny is involved. It’s a more SF secret than 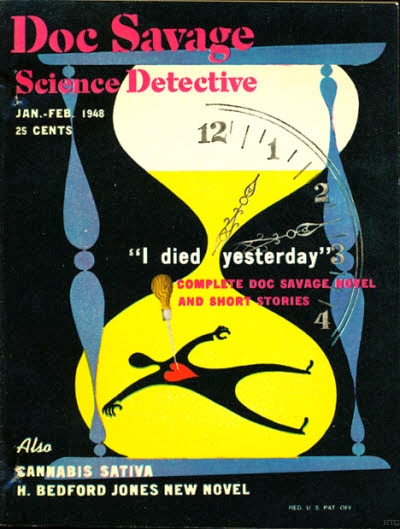 the first two stories, a chlorophyll-based method for growing food in a lab, thereby potentially eliminating world hunger. The real fun of the story, though, is getting to look in on Pat’s world. We learn a lot about Patricia, Incorporated, including that the staff are generally in awe of her adventurous reputation and slightly disappointed she hasn’t been doing much lately. The salon is decorated by A-list designers who indulge in the same kind of malarkey I only thought came into vogue years later (“the threshold of symphonic harmony with nectarian living.”).

Then there’s the gadgets. It turns out has Doc has been de-emphasizing his gadgetry in favor of relying on his wits — he figures it’ll keep him more resourceful — Pat has been collecting and storing them. She has a fashionable jacket, for instance, that’s actually a utility belt with gas bombs, smoke bombs and thermite sewn into the sleeve (after seeing it at work, she reconsiders the risks of that one).

That makes it all the more frustrating that at the end of the story, Pat’s contemplating quitting adventuring. She wonders if it’s fear, then realizes she’s not scared, she just doesn’t want to stick her neck out like this. Admittedly the cast is dwindling — Johnny’s gone, Renny and Long Tom have one story each left — but the guys aren’t contemplating retirement. The book deserves a better ending. But still, giving us a Pat-centered novel is more than I’d have expected.

2 responses to “Doc Savage’s Women: Let’s Kill Ames, Once Over Lightly, No Light to Die By”