Doc Savage wants some action: Hell Below and the Goblins

Starting with The Fiery Menace, “you’re too valuable on the home front” became the excuse for not having Doc and his team in uniform. 1943’s HELL BELOW and THE GOBLINS both build their openings around that idea. 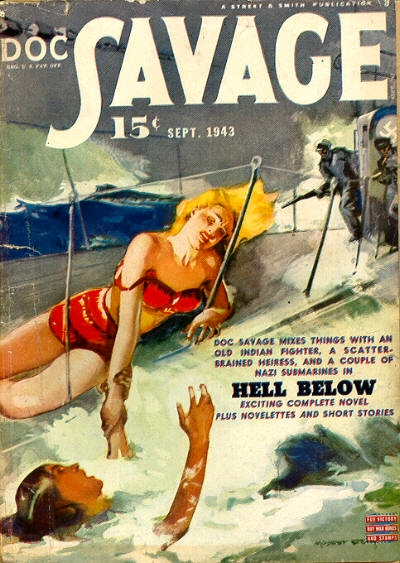 Hell Below opens with Doc and Monk trying to convince the brass to let them see some action. The brass point out that Doc and his team get shot at a lot more than the average soldier, but that doesn’t deter them (Bobb Cotter points out that as Doc’s still operating on a no-kill policy, having to use real bullets would surely be a problem). This attracts the attention of grizzled Western businessman Too-Too Thomas who is trying to enlist the Navy in some sort of project. He proposes to Doc that as they’re both being frustrated by military red tape, they join forces and steal a bomb-laden Navy seaplane for his project (which he refuses to explain). Doc, of course, is not on board with this idea.

It’s a great opening that develops into a competent but much less great WW II adventure. Two prominent Nazis (based, Cotter says, on Goering and Goebbels) are fleeing the dying Reich (mid-1943 seems surprisingly early for that) by submarine for a new home in Mexico. One plans to build the Fourth Reich, the other just wants to retire in luxury. They’ve seized Too-Too’s Mexican ranch, a place so isolated in the desert they can live and scheme unopposed.

Further complicating things is Schwartz, a Nazi submarine captain out to drag the traitors back to Germany for trial. There’s a lot more detail on running a submarine than we usually get, which I suspect reflects the wartime era.  Surprisingly, Schwartz gets to go back to Germany at the end of the adventure. Even though he’s offered up as a good German acting out of loyalty to his country, he’s capable and obviously dangerous — not the sort who usually lives to fight another day in pulp adventures.

Even more surprising, the Nazis make a couple of references to Doc as the embodiment of the master race ideal and he doesn’t argue with them. That’s hardly a comparison Dent could have wanted, so why bring it up if not to refute it? And it could be refuted; Doc, after all, is the product of scientific training, not Aryan genes (even if Philip José Farmer later credited him with an inherited mutation).

Pat gets a part in the adventure and even makes a significant contribution, putting a chemical in an airplane gas tank that allows Doc to track it.

The Goblins is noteworthy because it turned out I didn’t have the double-novel paperback containing it and Secret of the Su (which will be covered next month). It opens with telegraph operator Parker O’Donnell finding grinning green dwarf in his bedroom, only to have it disappear. We then jump into the opening of what feels more like a lighthearted mystery than a Doc Savage novel. Gorgeous attorney Martha Colby visits Parker and informs him he’s received an inheritance from his father. Part of the condition is that he accept Martha as his legal guardian. Parker’s 25, but Dad took precautions against Parker inheriting his impulsiveness and occasional bad judgment. Martha’s first assignment is to take Parker to dad’s old partner, Tom Brock, for a good stiff talking-to.

In between all this, Parker is watching Doc’s latest battle with the military brass, carried on by telegraph (Doc’s in the area on a defense project). As his telegraph skills have stuck him on the home front, he’s sympathetic to Doc. Then people start trying to kidnap or kill Parker and Martha. Doc gets involved. So do more of the green goblins, which a local college-educated Native American (who still comes off as a stereotype) suggests are a spirit creature. Certainly they seem supernatural, able to burn men to a crisp with a touch. Lester Dent’s story does a remarkably good job hiding that they’re just a variation of the flying bodies in The Man Who Fell Up. A much nastier variation as they’re specifically attracted to human flesh. They’re an invention by Tom Brock, who’s protecting Parker from the Nazi villains. Unusually the Nazis aren’t after the invention, they’re after valuable tin deposits on the land Parker inherited. More precisely, they’re determined to keep Parker from learning about the deposits so the US government can’t make use of them.

Normally Dent leaves it to the last minute to show that the supernatural element has a mundane explanation. Here, Ham has the sense to figure it out mid-book: Native American spirits wouldn’t have hired a bunch of tough gunmen to work for them. Ergo, mundane.

6 responses to “Doc Savage wants some action: Hell Below and the Goblins”