Some good Doc Savage yarns: Danger Lies East, No Light to Die By, the Monkey Suit

After that last trio of disappointing novels I wondered if finishing out Doc’s adventures would be nothing but a slog. Apparently I was pessimistic. 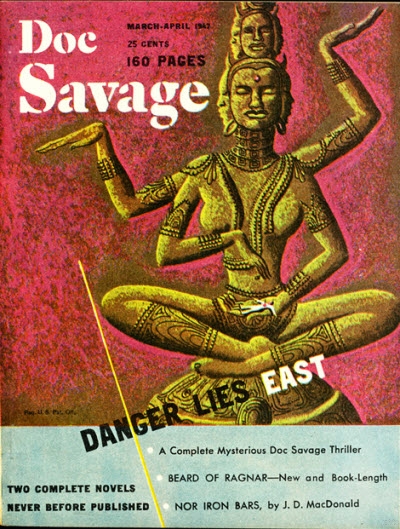 DANGER LIES EAST opens with “At three o’clock he was dead.” It then watches as the man apparently takes a fatal drug with his lunch, but it’s actually a concoction Monk is using to incapacitate him. The death comes as the guy tries to get away and gets knifed in the back by someone.

Monk took an interest in the guy because he was following Doc, which probably relates to the State Department’s Morand (described similar to MacChesney in The Black, Black Witch as a competent but almost stereotypical old-school diplomat) calling Doc in. As Doc has previously complained, this means it’s something so nasty nobody else wants to touch it. He is, of course, right: there’s unrest in India (when this March-April 1947 magazine came out, India’s independence and Pakistan’s separation were on the way) and in the Middle East (we’re a year out from the birth of Israel) and there’s prominent religious leader, Nesur, who can decide if things erupt in violence or stay calm. It looks like he’s going to choose option A and as the U.S. treated him as a Nazi sympathizer in the past (unfairly, Morand concludes now) he’s not on our side and the government doesn’t even know which way to find him. Can Doc locate him and convince him to push for peace?

This reminds me a lot of Mask of Fu Manchu — the Third World is a powder keg and one holy figure can light the fuse! — but the grounding in real-world geopolitics gives it more punch. Off Doc, Monk and Ham go to the Middle East, hunting for Crockett, a Modesty Blaise-type crimelord who has some connection to Nesur. Surprisingly, Crockett turns out to be quite pleasant and decent — and winds up working with them against a corrupt oil syndicate that plans to seize a large chunk of the region’s oil in the chaos that Nesur will bring. It’s another story where Doc’s just a competent ordinary guy, but this time it works.

NO LIGHT TO DIE BY opens with a foreword by Kenneth Robeson explaining that a guy named Sammy Wales wrote this one as a first-hand account of his adventure with Doc Savage; an exchange of cables between Robeson and Doc follows with the latter protesting against publishing, explaining in a statement that Sammy writes as if Doc were superhuman instead of a guy who has trained and worked to become what he is. He sounds like Sherlock Holmes grumbling Watson’s stories about him are all too shallow. 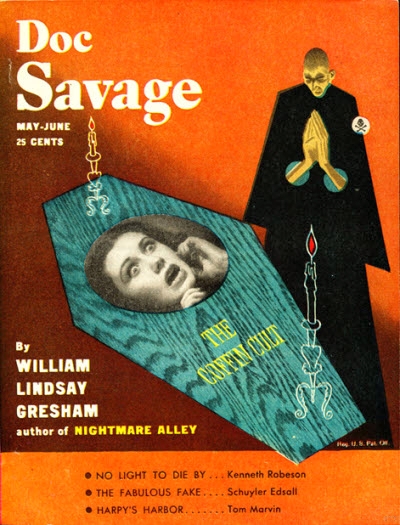 Sammy is the kind of down-and-out drifter Dent used in a number of his pre-war Doc novels such as The Flaming Falcons, but having him narrate (the first of five first-person books) gives this a different feel. In the opening, the beautiful voice of Paula Fenisong wakes Sammy up by mistake; as Sammy learns later, there’s another Wales at the hotel he’s staying at, a lunar expert. Pretending to meet the guy lets him meet Fenisong, get a fat payment from her boss, and then get slapped around when they realize he’s not who he claimed to be. Intrigued, he shadows them to a reception where Fenisong lures Doc Savage out onto a terrace in time to witness a strange light display in the heavens. Before long, Sammy’s up to his neck in trouble alongside Doc, Monk (who suddenly knows how to perform a CSI forensic analysis) and Ham as they try to find out who’s behind the light — and mysterious blobs of shadow — which Doc warns could be a devastating weapon.

Sammy has a great narrative voice and he’s an entertaining lowlife. He’s willing to skip out on a bill and feels that after his WW II service and medals he’s entitled to take it easy. Shortly after saying that, he sees a display of Doc’s medals and feels rather cheap to realize how much more Doc has done. Sammy’s not a total rat (Doc notes in the intro that Sammy doesn’t see how much he’s changed in the course of the adventure). The adventure is in the pre-war style with an SF threat and Doc using his anesthetic grenades again. Sammy never learns exactly what the “chromospheric” technology does, so neither do we.

Doc tells us in the introduction that his father trained him to be a superman because of being victimized by criminals; as several earlier books say he didn’t know the reasons, apparently he’s learned since. Doc mentions being trained for twenty years and throws in a comment that “when you let a bad thing happen to you, you have it coming” which I can’t say I agree with.

The narrator of THE MONKEY SUIT is the much less likeable Henry Jones. A chemist who narrates with stuffy academic formality, he encounters an old friend and 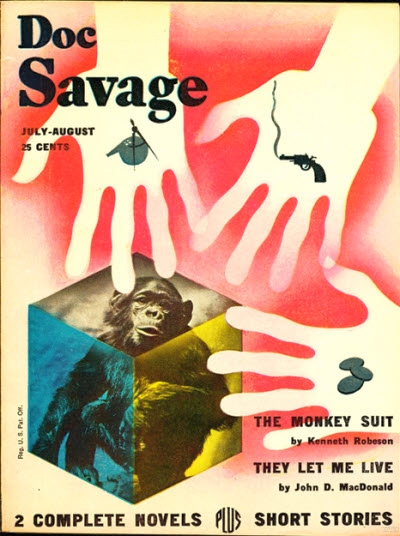 fellow chemist, Dido, who gives Henry the key to a locker in Grand Central Station. Curious, Henry follows Dido to a meeting with stunning Lila Farrar, Dido’s boss’s daughter, and finds himself blown away by her beauty. I expected that when plunged into the action, Henry would rise to the occasion, shake off his stuffiness and get the girl but nope.

After Henry escapes random death a couple of times, fellow chemist Monk Mayfair points out what Henry missed: the attacks weren’t random. Someone wants the box in the locker, which is odd as it turns out to be a monkey costume. Monk calls in Doc, which doesn’t suit Henry as he sees Lila bowled over by Doc; Henry desperately wants to believe Doc isn’t all that smart or amazing, and keeps screwing up Doc’s plans by trying to play hero and impress Lila. When the bad guys invite him to put his skills to work for them, he seriously considers it.

The McGuffin is a ray Dido invented that preserves food with ultrasonics, no cans or freezing needed (not the first time food preservation has been a plot element). That seems an odd invention for a chemist but it turns out Dido’s running a scam, so there you.

I look forward to reading the next three in this sequence.

2 responses to “Some good Doc Savage yarns: Danger Lies East, No Light to Die By, the Monkey Suit”