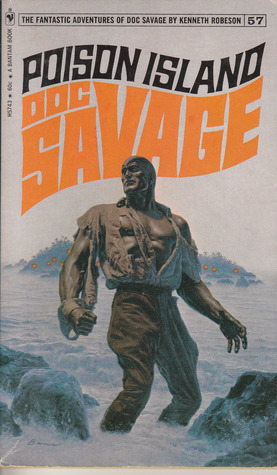 Lester Dent had a number of stock openings for a Doc Savage story, such as one of Doc’s team discovering an evil plot, or a desperate person trying to reach Doc and running into trouble. One he seems to have added to his portfolio around 1938 is to have a likable young drifter stumble into trouble: Sagebrush Smith (The Pirate’s Ghost), Tom Idle (Mad Mesa), Hobo Jones (The Flaming Falcons) and now Herb March in POISON ISLAND (cover by James Bama, all rights to image with current holder)

To the dismay of his girlfriend Glendara Smith, Herb has decided he wants to do some adventuring before they tie the knot. That includes becoming part of a revolution in Hidalgo (yes, the country that provides Doc with the gold to finance his work), which in contrast to The Golden Peril is treated as a harmless lark (the government swats the revolutionaries down with little effort). Herb stows away on a yacht to get out of the country, tries to impress the gorgeous owner with his derring-do, learns she’s Pat Savage and realizes she’s way more an adventurer than he’s ever been (to say nothing of her cousin, of course). Then Herb discovers another stow-away plotting against the boat and gets a warning to Glendara before Pat, Herb and the crew pull a Marie Celeste and vanish. More vanishings follow in subsequent chapters.

It turns out the former right hand of one of Europe’s dictators (“The politician was one of the — well, he was the latest kind.”), having been exiled by the tyrant as a potential rival, is now trying to spark a war between his homeland and the U.S. The vanishings involve boats carrying fuel for the villain’s ship, or in Pat’s case gold for Doc Savage (though why she had to transport it herself is unexplained). It’s reminiscent of both The Submarine Mystery and The Devil on the Moon in riffing off the pre-war situation and bland as well. Pat might as well have been Pretty McCaptive for all the action she gets; Johnny speaks without his usual polysyllabic dialog. Glendara, on the other hand is a blast: plunged into danger, she discovers she kind of likes it. Although she and Herb appear to be headed back to normality at the end, I’d like to think of them both going off for more adventures (a shame none of the comics adaptations use some of these fun guest-stars).

Tech-wise, we learn Doc’s aircraft hangar has a kind of diesel-punk security camera, taking pictures every minute or so and then instantly, automatically developing them. Monk claims to have a truth serum that drives you mad while you babble your secrets; it’s a bluff, but Dent deploys a drug that does just that in Hex, coming up next month.

I found THE STONE MAN a lot more fun even though it’s just a fairly mundane Lost Race story by this series’ standards. The book opens with schemer Spad Ames (“His specialty was avoiding the law.”) discover said race in a Southwest cave system and sees his partner transformed into stone. Actually he’s been frozen by a miracle mineral that can lower the temperature to absolute zero. The lost people, while they want to stay hidden, also hope to somehow market this as the ultimate refrigerant; Ames wants control of it for the same reason (the book skates over the potential for using it as a weapon). Doc has to stop Ames while avoiding the hidden civilization’s desire to lock him up along with anyone else who discovers them. They are, however, much more mundane than, say, Land of Always Night.

Part of what makes it work is how Doc gets involved. Ames’ partner is Herman Locatella, a lawyer on the brink of deposing Ham’s standing as the world’s best-dressed attorney. So Ham bugs Locatella’s office, hoping to prove the guy is dirty. I also enjoyed some of the snappy dialog (“I lived on rattlesnakes for almost a month.” “That almost makes you a cannibal, doesn’t it?”). For whatever the reason I think I enjoyed the book more than it’s objectively worth.

A minor oddity is that both books involve Ham or Monk humiliating the other by tricking them into a sucker bet with an embarrassing penalty: Ham has to be Monk’s chauffeur in the first book; Monk has to bark like a dog when Ham enters the room in the second.

Cover by Emery Clarke, all rights to current holder. 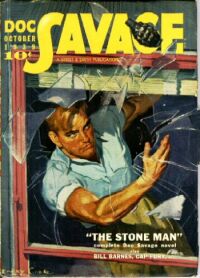