We’re now in the post-WW II period. Hopefully the remaining years of Doc’s magazine won’t all be this unsatisfying. All three of the stories this time out are recycled from better ones.

THE SCREAMING MAN opens with Annie Flinders shadowing Doc around some POW camps in Manila as he talks to prisoners who haven’t been repatriated yet (it’s similar to a scene from Jiu-San). Annie is an interesting character, a dancer who got into war work because she wanted excitement but the WAACs stationed her far away from the front lines. She’s finally made it to the Philippines but the war is over; still, it’s obvious Doc’s up to something.

When she tries to cut in, the bad guys kidnap her to find out what Doc is up to (typical for this era, Doc is  ineffective helping her). Now Doc, Monk and Ham, who are hunting a vanished Johnny Littlejohn, have to find Annie too. The trail leads to an ocean liner repurposed to ship a bunch of POWs home. Both Johnny and Annie are on board.

Johnny, we learn, disappeared while investigating the mysterious Jonas Sown. Who may be an urban legend, because what are the chances a single man turned Japan, Germany and Italy toward warmongering  and fascism? But Johnny has confirmed he’s real, hiding on the ship; just as they caught Hitler in Violent Night, they have to stop Sown. The villain’s agents refer to Johnny as “the screaming man” without any explanation (he’s not screaming).

Trouble is, we know it’s important to catch Hitler; a made-up villain’s escape doesn’t have the same punch. We don’t see enough of Sown to make him believable as a John Sunlight-class monster. The man Doc finally unmasks as Sown is smart, but hardly Super-Evil Genius Worse Than Hitler smart. We don’t even know how he worked his magic; Johnny suggests it might have been some kind of mind-control tech but that’s just a hand-wave. Sown ends up as mere smoke and mirrors, though he returns in one of Will Murray‘s Doc Savage novels, The Frightened Fish

MEASURES FOR A COFFIN would have worked perfectly well as a straight detective story. It’s not strong enough for Doc, even given that 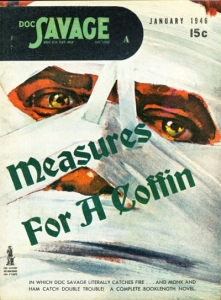 Monk and Ham are the ones handling most of the action; it’s also a second-rate variation of Lo Lar’s scheme in The Feathered Octopus. It opens well as the ticket takers at a prestigious medical conference realize several of the tickets are fake — but who’d want to get in free? I assumed the goal was to kill Doc (the keynote speaker) but no, it’s to arrange an “accident” in which he’s hideously burned and has to be mummified in bandages. With Doc’s aides off overseas, nobody spots the bandaged figure announcing his retirement from adventuring is a ringer; he’s going into business, with an idea to helping people through building thriving businesses offering good jobs and useful products. Given his reputation, investors are not lacking.

When Monk and Ham return from Europe, the schemers blows up their flight to stop them interfering. They deduce this has something to do with Doc’s retirement, which looks fishy to them: would he really do that without talking it over with them and the others? In a relatively short span of time they’ve exposed the villains — competent, but not that formidable — and rescued Doc. In the aftermath, Doc reflects that his reputation is a valuable asset — a fascist coup in South America failed merely because he threatened to intervene — and that the scheme, had it gone through, would have destroyed it. That’s the best bit in the book. Second best is the book’s female lead, Miss Clayton. She’s identified as “an Intellect” whose work for a high-tech company entitles her to “the most impressive office in the place” and two secretaries. This doesn’t affect the story, but for that very reason I’m glad Lester Dent added the detail rather than make her purely decorative.

SE-PAH-POO should have worked better, as it’s recycling the pre-war SF style of the series: the villain has a deadly super-weapon, in this case a sonic-based heat ray that melts metal and burns flesh. However this element is buried in a mundane murder mystery involving the Explorers Club, a group of yes, explorers, who are currently excavating a fabulous ruin, a pre-Columbian cliff city in the Southwest. “Se-pah-poo” is supposedly the native name for a hole in the floor of their holy places that allows the god to enter.

The adventure starts off with Doc getting off a train and meeting Grunts. He’s the fourth Native American sidekick to crop up in this period and like Johnny Toms in Strange Fish, is college educated but talks in pidgin. Grunts also conforms to the superstitious and cowardly stereotype, freaking out when anything weird happens.

Doc calls for Monk and Ham, who wind up traveling west with Wanda Casey, who like Grunts inherited her membership in the club from one of the founders. Having a woman join upset the group enough they’ve changed the rules so that if someone else dies, the surviving members assume his share. This gives one of them a golden opportunity: kill off the rest of the club and he gets the sizable treasury for his own.

I like the idea of using a super-weapon for such a mundane purpose could certainly work, and it probably would have with some of the larger-than-life dash of the 1930s. Here, not so much.

#SFWApro. Covers by Emery Clarke, all rights to images remain with current holders.

2 responses to “Doc Savage, recycled: The Screaming Man, Measures For a Coffin, Se-Pah-Poo”