Since I last reviewed the George Perez Wonder Woman reboot, I’ve read slightly over another year’s worth of issues, and a busy year for Diana it was.

•Crossovers. Following the success of Crisis on Infinite Earths, crossovers became an annual event. In #8, which is told in a series of letters and diary entries, Wonder Woman participates in the dreadful Legends crossover event. A couple of issues later, she launches a plotline that ties into the much better Millennium crossover. These things can bog a series down, but Perez handles them well. Legends happens offstage and Millennium ties into Diana’s own story. 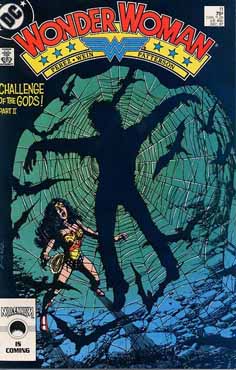 •The myths. Following her defeat of Ares, Zeus, egged on by Pan (who turns out to be one of Millennium‘s villainous Manhunters) generously offers to have sex with her. Diana refuses; an indignant Zeus commands her to enter Doom’s Doorway below Paradise Island and test herself against the monsters there, to prove her worth as Amazon champion in “the Challenge of the Gods.” Plenty of action, mythological monsters, a big reveal about how closely Diana’s tied to Steve Trevor and the discovery of Hercules, imprisoned there in torment. It’s a good story that gives Hippolyta a chance to shine too. However the Amazons forgiving Hercules for assaulting, enslaving and raping them doesn’t sit as well with me as it did on first reading. 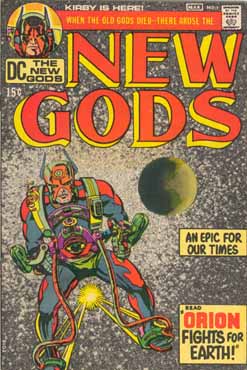 There’s also a minor retcon of John Byrne’s Genesis crossover, which established that all Earthly pantheons are indirectly the children of Jack Kirby’s New Gods. I never liked that (Kirby’s awesome, but he ain’t Homer) and Perez specifically negates it, at least for the Olympians.

•Romance, or at least as close as Perez’ Diana ever came. In Legends she meets Superman and understandably she’s blown away by him. Is the feeling she has when she thinks about him what people in Patriarch’s World call love? It isn’t (there’s a team-up story in Action Comics that settles that) and Diana’s love life goes dormant until the 21st century. I think this suffers from Perez not wanting to get into the possibility of Amazon lesbian love (so Diana would understand love, just without heterosexual examples) though he did touch on it later (Greg Rucka made it explicit).

•Talk and more talk. In an interview (never published, alas) I asked one comics writer and WW fan what she thought of the reboot, and she said it was too talky. I didn’t think so at the time, but I must admit it’s more notable rereading. #8 is mostly people talking about Diana, rather than Diana doing anything; in #17 Diana visits Julia and Vanessa in Greece and there’s a whole bunch more talk. Not that talk is a bad thing — James Robinson’s Starman is conversation-heavy and usually uses its well — but in these books the dialog is not really interesting enough. 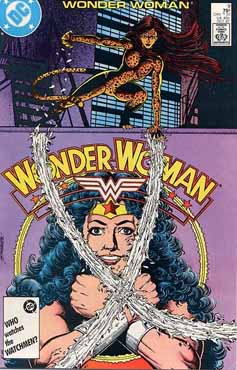 •Old foes. In these thirteen issues, Perez reboots three pre-Crisis adversaries, to varying success. First came Barbara Minerva, the post-Crisis version of the Cheetah. Minerva is an archeologist who steals relics she can’t collect legitimately. When she’s not able to steal Wonder Woman’s lasso, she tries taking it by force, transforming herself into the fast, deadly Cheetah (as you can see a cat-woman rather than a woman in costume).

I’ve never thought well of this Cheetah, but rereading I realize that’s not Perez’ fault. His Barbara Minerva has a focus; multiple other writers have used her since, but without any focus. She’s just a Wonder Woman villain with no distinctive motives or goals beyond villainy. That’s damn boring. But that isn’t Perez’ fault, so I apologize for thinking so. 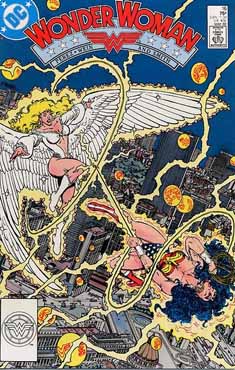 Next up, the post-Crisis Silver Swan. Surprisingly for a guy who loves mythology, Perez skipped Roy Thomas’ version (a descendant of Helen of Troy) in favor of an abused woman whose bullying husband has not only empowered her with a sonic cry (science, this time) but brainwashed her with a jealousy of Wonder Woman (quite close to the original Cheetah’s, actually). It’s an effective story, but Thomas’ mythological origin was so much better, I wish Perez had incorporated it (I think it could be done without losing the abusive relationship aspect). 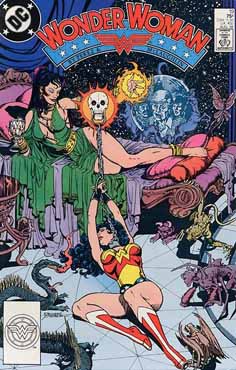 And finally we get Circe, who markedly improves on Dan Mishkin’s version. It turns out the part of Greece Wonder Woman visits is under control of Circe, who lives on an isolated island but uses her shapeshifted slaves (“beastiamorphs”) to monitor the area in animal form; work against her and you die. The resistance sees Wonder Woman’s presence as a chance to get free; Circe sees her as a prophesied threat (as did the Mishkin version, but the prophecy’s easier to understand here).

After such a strong beginning, unfortunately, Circe didn’t return until 1991’s War of the Gods crossover, and I don’t think she kept the malevolent MO (both the Cheetah and Silver Swan came back quicker). We’ll see.

Like his initial arc, Perez’ work doesn’t blow me away as much as it did on first reading, but it’s still damn good.