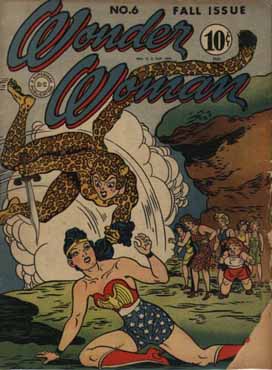 So last week I finished WONDER WOMAN: The Golden Age Omnibus, Volume 1, which runs through Wonder Woman #7 and Comics Cavalcade #5, which came out in the winter of 1943. The first two-thirds gave us a formidable foe in Baroness Paula von Gunther, then redeemed her. The rest of the book (I finished my partial review of the omnibus with Wonder Woman #4) introduces two more great adversaries, Dr. Psycho and the Cheetah.

Dr. Psycho, whom I’ve blogged about before (I don’t have time to search for the link, alas) is a big-headed brilliant dwarf. His fiancee Marva admires his mind, but she’s not happy with his looks; a rival for her love frames Psycho for a theft, which leads to her testifying against Psycho in court and sending him to prison. Psycho becomes convinced she was part of the frame so she could get rid of him and marry his rival. From this it’s a short step to believing all women are evil and giving them rights is an attack on men. This being the 1940s Psycho can’t spread his philosophy on YouTube. Instead he uses a blend of science and occultism to channel ectoplasm through his wife, whom he’s hypnotically reduced to a slave medium. He summons up George Washington’s supposed ghost (an ectoplasmic construct) to warn that giving women jobs in factories will lead to disaster, then sets out to make his prediction come true.

For me Psycho’s an alarmingly contemporary character who could fit into the world of right-wing misogyny without missing a beat.

The original Cheetah, Priscilla Rich, was a frustrated young socialite who wants to be the center of attention, but never is. When she organizes a fundraiser in Wonder Woman #6 for the war effort, all the attention goes to Wonder Woman’s appearance, so Priscilla tries to sabotage her performance and kill her. When that fails, her frustrations burst out as a second personality, the predatory Cheetah. Dominating Priscilla’s good side, the Cheetah begins a campaign against Wonder Woman, culminating in stealing Hippolyta’s girdle and conquering Paradise Island.

Just as Marston reformed Paula (who makes several appearances in these issues), he doesn’t see a need to keep these new villains around. After two appearances in the Omnibus, Psycho made one more, then vanished. The Cheetah got four stories, at the end of which Priscilla finds a good outlet for her ego: she’s an amazing dancer, so Wonder Woman realizes channeling her energies that way will eventually banish the Cheetah. She does crop up in one later story, presumably before the cure is finished and in one story unpublished until 1969.

Both the Cheetah and Dr. Psycho would return in Robert Kanigher’s brief Golden Age reboot era, neither one used well. Roy Thomas’ brief run did a better job with Dr.

Psycho, but Priscilla Rich went unused except for the Bronze Age WW II run. Gerry Conway later replaced Priscilla with her niece, brainwashed into an eco-terrorist. Then George Perez introduced the post-Crisis Cheetah who gets used a lot by other writers, but not effectively.

Wonder Woman #7 shows life in the year 3000, with Diana’s supporting cast around thanks to Etta developing a miracle “life vitamin” (it’s one of the few issues to show Etta’s got some brains). The female-dominated government of the future infuriates traditional wardheelers and political bosses — my god, politicians are expected to think of the country and not line their own pockets! Another story has an explicitly masculine political movement try to reclaim power from the women. It’s a reminder the issues we deal with today didn’t pop out of nowhere.

There’s also, of course, the standard elements of bondage, some minor villains (Dr. Poison returns) and Wonder Woman contributing to the war effort. All in all, pretty good. And the Omnibus makes H.G. Peters’ art look better than any of the other reprints I’ve seen.

6 responses to “Wonder Woman, a Psycho and a Cat: More Golden Age WW”