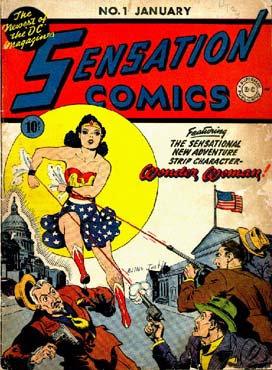 I’ve been gradually working through the first WONDER WOMAN: The Golden Age Omnibus (by William Moulton Marston and artist Harry G. Peters), which starts with her debut in All-Star Comics #8, then movies into her lead series in Sensation Comics and then her own book (which was a big deal back then — nobody got a solo book if they weren’t A-listers). While I’m not finished the book yet — it’s large, and this is back when one issue was 64 pages — it occurred to me that I ought to give it some of the same in-depth treatment I give the Amazing Amazon’s later eras. So this post, I’ll work through the material in Wonder Woman #4, which culminates in the redemption of Nazi spymaster Paula von Gunther.

Not that the Baroness von Gunther is all that’s going in that era (1942-3). Just for openers we have Steve Trevor crashing on Paradise Island while pursing spies, Princess Diana saving his life, then winning the right to journey to Man’s World to fight for justice and women’s rights, and against the Axis. She buys the identity of nurse Diana Prince to watch over him (the real Diana needed money to leave her job and join her fiancee in South America), then transfers to military intelligence, working as secretary to Steve’s boss, Major Darnell. She also befriends Etta Candy, a Texas-born sorority girl at Holliday College. While Etta’s fat and a glutton for sweets, rereading these showed me she’s also remarkably formidable and capable in a fight.

Marston had an interest in bondage and submission, which led to some blatantly kinky stories (I cover one of them in my WTF Wonder Woman moments list at Screen Rant); slavery and dominance, practiced by a good mistress, would train the slaves into better behavior and more enlightened attitudes (this was Amazon style slavery, not American race-based slavery). The bad guys are also big on slavery; Paula keeps her own army of broken, dominated slave girls (spoiler: she’s not a good mistress).

Much like the Superman stories of this era, Marston constantly emphasizes how awesome Wonder Woman is, performing “the greatest feat of daring in human history” in one story, for instance. Most of the stories pitted her against standard Nazi spies, though (also like Superman) she tackled other issues. In one story, for instance, she helps salesclerks rally and protest against a bullying boss who underpays and abuses his workers. There’s always a feminist element to the stories; along with the sexy side of bondage, Marston, as biographer Jill LePore says, also invoked feminist images of women breaking free of their shackles.

Most of the villains are either Nazi spies or American crooks; the only costumed villain is Dr. Poison. However we do have Mars, god of war, and his three

agents: Deception, Conquest and Greed. Wonder Woman #2 is a book-length battle against them, taking Diana to Mars (where Mars has his base). Having a book length arc was unusual for the day: issues of Superman and Batman had four unrelated stories.

And then there’s Baroness Paula von Gunther. First appearing in Sensation #4, identified visually by her long, gold cigarette holder (with a snake twined around it) she has the comic-book equivalent of movie actors’ screen presence: she stands out in a way none of the other Nazi spies of this era (or Dr. Poison, even if she did make it into the Wonder Woman movie) did. She’s cunning, ruthless, a scientific genius and maintains an Army of submissive slave girls; even after Diana imprisons her (more precisely one of several times), her slaves are willing to carry out her plans.

Then in #3, things change. Wonder Woman discovers Paula has been forced into Nazi spy work because her daughter, Gerta, is in the Reich’s clutches. Diana frees Gerta and Paula changes; in the final story, she risks her own life to save Wonder Woman, then submits to training on Paradise Island. This all comes a little out of the blue (it’s not like she showed any ambivalence in her previous appearances) but it worked. In #4, Paula completes her training and carries out several challenging, heroic tasks alongside Wonder Woman to prove herself an Amazon. She’d continue helping Wonder Woman through the Golden Age.

I’ll be back with the rest of the volume when I finish it in a few weeks.

#SFWApro. Covers by Peters, all rights to images remain with current holder.