Gerry Conway’s contribution to the Bronze Age Wonder Woman was bigger than I remembered. First he wrote around ten issues for her World War Two retcon phase. After he returned to the book with #259, he stuck with it until #285. That’s a welcome break from the constant turnover. Equally important, he soft-rebooted Diana (whether it was Conway or editorial’s call, I know not) back to the classic set-up of Diana Prince and Steve Trevor working for Army intelligence. After the space-shuttle period and then the return to the UN failed, this soft reboot took, lasting after Conway — until the George Perez hard reboot of the mid-1980s wiped everything away, in fact.

After Diana takes Steve back to the United States, she hacks the military computers to create a false identity for herself as Diana Prince. In addition to working for Steve, she makes a friend, and eventual roommate of Lt. Etta Candy. Etta had been WW’s constant sidekick in the Golden Age, a plump sorority girl with a taste for adventure. The Wonder Woman TV show and therefore the WW II-era comics had rebooted Etta into one of Diana and Steve’s colleagues; Conway now did that for the present-day series. While Etta would stay military after the Perez reboot, Wonder Woman: Earth One went back to sorority sister; Legend of Wonder Woman had her start in a sorority, then enlist with Diana.

Conway’s take on Steve reminds me of the brief Steve Howard period in which Steve struggled to prove he could stand on his own. Here, though, it worked. Steve is initially embarrassed by Diana constantly rescuing him, but by the end of the run, he’s come to accept that’s his problem to deal with, not hers. Their relationship really feels good.

General Darnell, last seen in the late 1960s, is less successful. In the Golden Age he’d shown some interest in Lt. Prince; the reboot version is quite aggressively interested, pushing for dates, not wanting to take no. Given that she’s under his command this comes off as harassment (it’s also a major violation of military rules). Conway’s Diana, though, just roles her eyes (Roy Thomas would make Darnell much creepier a few issues down the road).

So that’s the cast, how about the stories? Conway’s first story after the reboot pits Wonder Woman against her old foe Angle Man. The next arc is a good one pitting WW against Kobra, one of DC’s few free-floating villains (i.e, not attached to any particular hero) of the Bronze Age. This also gave us a new version of the Cheetah, one of Diana’s top Golden Age foes. This one was the niece of the original, brainwashed by Kobra into an ecoterrorist as part of his scheme to destabilize the world economy. The story also added a recurring support cast member, Mother Juju, an old voodoo priestess living in DC. 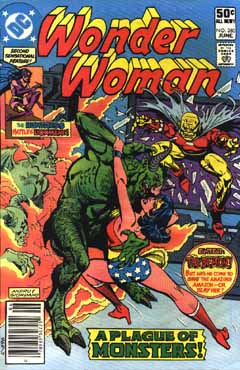 Juju is stock (almost a literal magic Negro) but she plays a large role in the next arc, involving Jack Kirby’s character Etrigan the Demon; his creepy enemy Klarion the Witch Boy; and a disability stereotype, a paraplegic who’ll do anything to regain the use of his legs. It’s a middling story, but Conway’s Etrigan shows flashes of the more vicious version who’d become standard a few years later. After Etrigan saves Diana and Etta, for instance, Steve offers to shake his hand; he sneers and mocks Steve’s show of politeness.

The final arc pits Diana against a depressingly generic Chinese warlord, the Red Dragon. The story handles Steve/Diana well, but the Red Dragon is a mediocre knockoff of Marvel’s Mandarin (proving I was wrong to think Mandy was comics’ last Sinister Oriental). On the whole, Conway’s stories in this period aren’t as good as his WW II ones, but they’re certainly enjoyable.

This period also added Huntress (the original version, the Earth-Two Batman’s daughter) as a backup feature. I’m not reviewing it here but that’s no reflection on it.

After a couple of guest writers, Roy Thomas took over scripting through 300. Which will be a good point for my next post on this reread. Until then…

#SFWApro. Art by Ross Andru, all rights to image remain with current holder.