As last weekend’s activity didn’t give me much in the way of movie-viewing time, let’s review some comic-book TPBs instead: 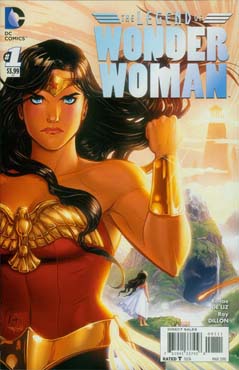 Tired though I am of retelling Wonder Woman’s origin, Renae de Liz’s THE LEGEND OF WONDER WOMAN: Origins makes it work. This has a mix of classic elements (Steve, Etta, WW II setting) with some of the more recent ones (Diana’s awkwardness adapting to man’s world, sinister evil lurking under Themyscira’s surface) and pulls it all together quite well. I really liked little details such as Diana catching a production of A Midsummer Night’s Dream and being horrified at the portrayal of Hippolyta (“This is how the world remembers my mother?”). Alas, the writer/artist had a falling-out with DC so we won’t be getting any more.

DUNCAN THE WONDER DOG by Adam Hines has lots of glowing reviews, but I must confess I couldn’t finish it. Part of the problem is that while the third I managed to get through has many great scenes, they’re outnumbered by the boring ones. There’s also the mechanical problem that Hines uses really, really small lettering in the word balloons and it was an effort to read. I’d say what it’s about, but frankly I don’t have the slightest idea how the different scenes fit together.

Mike Carey’s LUCIFER: Book One was another disappointment. It’s not that it’s bad, and if I’d never read anything from Vertigo before, I’d probably be blown away by this story of Lucifer’s adventures in Hell, Earth and other realms. But I have read it, and it reads like what Sandman, Hellblazer and Swamp Thing were already doing but with less spark. It doesn’t help that Lucifer seems to have the same personality as John Constantine. On the plus side, that’s a lot of subsequent volumes I won’t have to read!

DEADPOOL VS. THANOS by Tim Seeley and Elmo Bondoc was one I read as prep for my Thanos team-up Screen Rant list. Thanos and Deadpool are both in love with Death (Thanos is closer to an obsessive stalker), so when she disappears and people everywhere stop dying they reluctantly join forces to find out whodunnit? I lost interest in Thanos a long time ago, and Deadpool I can only talk in small doses. That said, this series wasn’t too bad, though I doubt I’d have bothered without the Screen Rant incentive.

NIGHTWING: Blockbuster by Seeley (again) and multiple illustrators reintroduces crime boss Roland Desmond, AKA Blockbuster, to the New 52, Nightwing reuniting with Huntress to stop some Spyral agents gone bad and Dick’s love life once again going south. Seeley’s work on the series has gone wildly up and down (see this review, and this one) but this one’s on the up side. However while I liked Dick’s conversation with girlfriend Shane about how he’s rejected Batman’s path of revenge, his argument she’s still mired in angry doesn’t convince (it’s certainlly not how she comes across). Overall, good.

GREEN ARROW has had similar highs and lows under Benjamin Percy’s writing, but not as high. The Rise of Star City should have been way more of a win, pitting Ollie Queen against an arrogant capitalist/objectivist who’s taken over Seattle and renamed it Star City, in line with a mystic secret discovered by Oliver’s ancestor (I’m curious what Seattle-ites make of this — it’s the kind of history usually attached to Gotham or Opal City, not a real place). Unfortunately it never catches fire and there’s way too much effort to make this look closer to the TV show (like the big reveal of the Ninth Circle’s leader). Ultimately, thumbs down.