While I’ve never been a romance comics reader, I do find some of the comics covers striking. See what you think. First, one by John Romita.

And dang, this pretty much embodies the idea of a sexy young woman from around the time I hit puberty. Dick Giordano did the art. 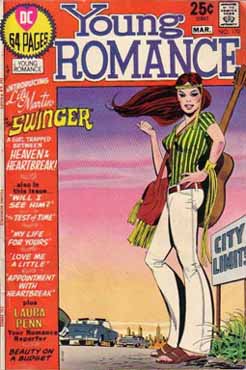 A somewhat more old-fashioned image by Bernard Sachs shows that even in 1950s love comics, musicians got the girls. 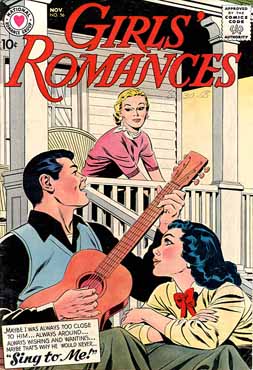 And another by Sachs. Love the yearning, heartbroken look, but as a friend of mine says, where does she keep her intestines?

And another uncredited one. “The Life and Loves of Lisa St. Clair” involved a wealthy young woman searching for a man who’d love her for herself, not her money.

For anyone who does have an interest in this genre, Jacqueline Nodell’s Sequential Crush blog is very good.

#SFWApro. All rights to images remain with current holders. Source for covers was the invaluable Mike’s Amazing World website.