So as part of rereading my Green Lantern collection, I recently reread the 1987 Millenium limited series, which tied into it. I’ve rarely seen it get any love in comics discussions, so as this is my blog, I’m going to argue that it’s much better than it’s given credit for.
First, the backstory: A couple of years earlier, Hal Jordan’s girlfriend gave him an ultimatum to quit being Green Lantern or she was breaking up with him. Not the first time a super-hero’s contemplated quitting, but remarkably, Hal did (at the time, that was a shock). John Stewart (the black GL in the Justice League cartoons) took over, but then along came the Crisis on Infinite Earths. The first big crossover event, it had Hal going back into action when he discovers his immortals masters the Guardians of the Universe have made a huge miscalculation that could hand victory to the alien Anti-Monitor. After the good guys win, the Guardians decide they need a long vacation, alongside their long-estranged spouses. The Green Lantern Corps was given its independence and told to spread out across the cosmos—except Earth, where the next race of immortals would someday be born. Earth could have as many GLs as it likes.
Steve Englehart, the GL writer at the time, said later he didn’t mean anything by that except an excuse to have multiple aliens join John and Hal (a good decision, his run on the book was awesome). When he was assigned the writing for DC’s third big crossover (following Crisis and Legends), he suddenly thought hmmm … 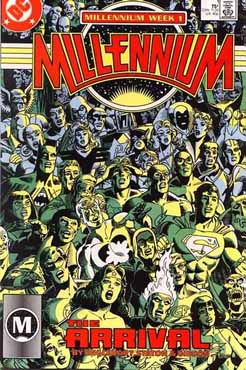 (Cover by Joe Staton, rights with current holder)
In the first issue of Millenium, one guardian and one spouse show up and gather Earth’s heroes, asking them to find the new immortals so the Guardians can train them. Unfortunately, the Guardian’s mortal foes, the Manhunters, know about the immortals too. And if the Guardians want something, the Manhunters are determined they not have it.
I rank this as one of DC’s best crossovers for several reasons:
•Speed. Millenium was weekly, so the whole thing took less than two months. A vast improvement over the 21st century when the big events just never stop coming. And things just felt like they were happening really fast.
•Concept: It turns out the Manhunters have planted sleeper agents around all of Earth’s super-heroes, waiting for the day they were needed. Some have been corrupted, some blackmailed, some, such as Commissioner Gordon and most of Smallville, mind-controlled (the town doctor was a Manhunter, so he implanted stuff when everyone was kids). Having enemies lurking among you, posing as friends, is an effective plot device, and Englehart got maximum mileage out of it.
•Nostalgia. I don’t know why, but I got a huge nostalgia buzz off reading this series. Seeing all the old 1980s heroes (original Suicide Squad, original Outsiders, Captain Atom, Booster Gold, the Teen Titans of the day, etc.) made me feel surprisingly happy—surprising because I rarely react that way, even reading books from my childhood. Go figure.
•Race. Englehart gets flak for using lots of stereotypes in creating his “new Guardians,” like a swishy gay guy whose eventual super-name is “the Strange.” Fair enough … but on the other hand, the series ended with a team composed of half women, and entirely nonwhite (unless you count the originally white but now a plant Floronic Man). That’s something you don’t see even now. So all things considered, thumbs up.
The one real downside is that Englehart shows us, in detail, the initiation of the New Guardians, which gives him an excuse to wax philosophical and explain the universe. It doesn’t work. Explaining the universe never works and it’s never as insightful as the writer thinks (I have the same problem with some of Englehart’s Max August books).
I’d have been interested in seeing what Englehart did with the New Guardians, but it was not to be. They got a series, but when his editor told him to put “the Strange” back in the closet, Englehart walked (he says on his website he’d promised a free hand tackling sex, drugs and religion). Then they turned Green Lantern into a weekly feature in Action (a weekly at the time) and that format didn’t suit him and collaborator Joe Staton (too bad, because the strip we did get was horrendous).
But when the Millenium began, it was pretty cool.