Copernicus, Superman and the end of everything: books (#SFWApro)

A MORE PERFECT HEAVEN: How Copernicus Revolutionized the Cosmos by Dava Sobel is less interesting for recounting Copernicus’ theories (I’m reasonably familiar with how they developed and how the world reacted) than for covering the rest of his life — his role as a Catholic church administrator, having to deal with the “Lutheran” heresy and such mundane matters as setting the price of bread loaves the monasteries sold to the people. Sobel also does a good job, as usual, capturing the details of Copernicus’ quest to understand the heavens but I skipped the two chapters which were actually a play she wrote about the astronomer (her main reason for writing the book was to give the play some context)

SUPERMAN: Return to Glory: by Gene Luen Yang, Peter J. Tomasi, Howard Porter and Mikel Janin is an improvement over the previous volume Before Truth, despite the fact the concept of Superman in a metahuman fight club isn’t at all my idea of Superman. Nevertheless, Yang makes it work and I really liked that part of the book … but wouldn’t you know, then we’re in a big crossover event involving Vandal Savage, and some aspect of the Rebirth crossover. Neither of them worked as well for me — they pretty much sapped the life out of this — and it didn’t help that huge chunks of the story are taking place in other books (even though the TPB does provide a synopsis). Frustrating. 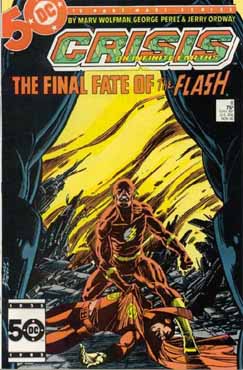 Speaking of crossover events, CRISIS ON INFINITE EARTHS from back in 1986 was the granddaddy of them all (Secret Wars preceded it but I don’t count it as the same sort of event). The 12-issue core story by Marv Wolfman and George Perez (cover by Perez, all rights remain with current holder) has the multiverse-watching Monitor recruit a mix of heroes and villains to stop his counterpart in the anti-matter universe, the Anti-Monitor, from devouring everything so his realm is all that remains. The battle that results is so big that the assembled supervillains trying to take over the world is just two chapters of this.

Everything we’re now used to in Big Events is there — deaths, transformations (this erased the DC multiverse for a couple of decades), changes (Wally West becomes Flash after Barry Allen dies), but it was unprecedented. Later events would throw deaths and transformations in because that’s what they were supposed to do; Crisis does it just to be awesome, and succeeds. Supergirl’s death in COIE #7 still packs a punch (there are also several deaths such as Aquagirl that are just collateral damage rather than heroic endings). That said, I wouldn’t recommend this to anyone just starting in comics, as it’ll probably be an endless stream of characters you’ve never heard of. And yes, that DC eventually undid so much of this — the single Earth, the single timeline, a new continuity — drains a lot of the power. While I hated erasing the multiverse, I think I’d have preferred sticking with that to endless rebooting it with more big events and little ones too. Well after COIE had supposedly changed everything, writers would get the g0-ahead to just reboot one particular character (Hawkman, Doom Patrol) which turned the new continuity into the old continuity and made everything messy. Still, standing on its own, COIE is one heck of an achievement.

9 responses to “Copernicus, Superman and the end of everything: books (#SFWApro)”