A cover reveal and thoughts on goals

Much to my surprise — they hadn’t told me — McFarland has already picked a cover for The Aliens Are Here. I’m not sure what the illustration is from, because it’s not one of the ones I submitted for the book. But that’s fine, because it looks fabulous and captures the tone better than anything I would have chosen. 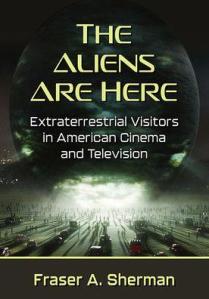 This was a good week for writing. I put in a lot of work rewriting Don’t Pay the Merryman (oh, it so needs a better title) and read the first section for the writing group. They loved it; now I just have to get the rest of the story up to that level. Several people said the section would work fine as itself if I strengthen the character arcs, so I’ll think about that option.

I rewrote The Adventure of the Red Leech and finally fixed the plot. Holmes is able to crack the mystery and thwart the killer without having to conveniently have a suitable mystic talisman (the rather hand-wave finish of the original published version). Still needs work, but it’s getting there.

I’ve also considerably reworked the plot of Impossible Takes A Little Longer and I’m pleased with it. No more long stretches of talk without compensating action. I managed to restore a lot of the characters who fell out of the previous draft — Rachel Chang, Darla Jeffries — and I think some of the key turning points are better placed. I shall start the next draft this month, with 25,000 words as the minimum goal. Plus fixing the remaining plot issues later in the book.

I didn’t achieve as much on my writing goals (or others) as I wanted to. I keep setting a goal to be more aware of local politics but I just can’t seem to make time. I did, however, send off another 60 postcards encouraging people around the country to vote (while this isn’t the exact link, you can find opportunities to help out here). I didn’t finish Red Leech or get Don’t Pay the Merryman as far along as I wanted. But the goals were ambitious enough to push me: everything’s progressing, even if it’s not as fast as I’d like. There are times when no matter how much I rewrite a story, I end up not improving. That’s not the case now. So setting the goals is doing the job it’s supposed to.

Oh, and I finished the tax forms. Now it’s just a matter of signing them and mailing them out. Once again I made a mistake in the write-off for our HSA, which upped our taxable income by $5,000. I caught that today, so yay!

Overall, I did complete enough goals to reward myself by buying the second Epic Iron Man Collection, which runs from midway through his time in Tales of Suspense through the launch of his own series (Gene Colan provides the cover).