For obvious reasons, this was a short work week

As usual for the last week of the month there was no Leaf to work on. But my mind couldn’t seem to shift to Questionable Minds so I watched some movies for Alien Visitors and spent most of my time on Undead Sexist Cliches. I finished proofing the footnotes and I polished the text through the middle of Chapter Seven. So next month, I should be done with polishing too. Then it’s just going through the steps to get it into book form at Draft2Digital and then Amazon, including writing cover copy and and getting the cover art.

I’m actually a little nervous: this topic is much more serious than my film books which makes me more concerned that I’ve done everything right and that my reasoning is rigorous. But I will, of course, press ahead. It will be done within a couple of months, and I can stop spending writing time on it. And if it contributes at all to the fight against male supremacy, well that’ll be awesome.

Thursday, of course, was Thanksgiving, which hasn’t been turkey day for me for more than twenty years. Normally we’d be eating at Café Parizade, which has the largest vegan Thanksgiving in the southeast (neither TYG nor I is vegan, but we do quite a few vegan events). This year, of course, is not normal, so I paid for takeout, then drove yesterday to pick it up. That was both exhilarating (whee, a trip somewhere besides the vet!) and unsettling (driving somewhere other than the vet! What if the car explodes?).  And I was also worried I’d made a bad call and the meal wouldn’t be substantial enough to be worth the money.

I needn’t have worried. Parizade’s portions were generous and while the menu wasn’t as diverse as the usual buffet, it was quite satisfactory: seitan cubes, pasta and veggies, garlicky mashed potatoes, Brussels sprouts (TYG had those. I can’t stand ’em), blueberry crumble, quinoa with veggies and several desserts. We did miss not being able to go back to the dessert table repeatedly, but on the plus side we were able to keep the leftovers so I didn’t feel the need to stuff myself to get my money’s worth. Or at least not stuff myself as much.

I’d planned a Zoom call with my family but there was a confusion about time so I had one call with my bro at 3PM and one with my sister and Dad at 4. Still fun.

Today I made a zucchini lasagna, which I’d planned to make Thursday — it’s one of TYG’s favorites — if we’d been doing our own cooking. And I started thinking about my December writing schedule and plans for next year.

To wrap up the week here’s a delightful painting by Gervasio Gallardo, who did so many amazing covers for Ballantine Books. 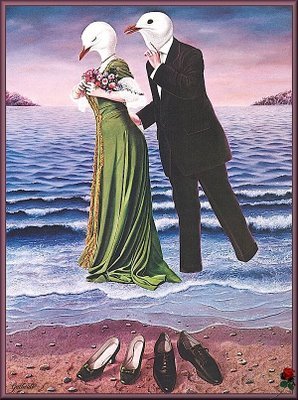