Lin Carter and the Ballantines changed my life (#SFWApro)

Or at least changed the things I like to read.
The late Lin Carter was, as someone once described him, fantasy methadone: If you couldn’t deal with the fact you’d read all of Robert E. Howard and Edgar Rice Burroughs, Carter’s fantasy series (most notably the barbarian hero Thongor) provided a sort-of substitute. Not enough to satisfy but enough to keep you going for a while.
Carter was, however, very knowledgeable about fantasy. In the late sixties he wrote a book for Ballantine Books (a small paperback published that put out a lot of SF and fantasy, including The Lord of the Rings).

The book, Tolkien: A Look Behind the Lord of the Rings, explained to non-genre, non-mythology readers that no, JRR did not invent elves, dwarves, magic rings or quests (though he did invent hobbits, of course, which is no small feat) and detailing some of his mythic and fictional predecessors. This impressed the Ballatines enough they invited Carter to edit a line of classic fantasies (listed at this website, source for all but the Tolkien cover image. All cover rights reside with the legal holder).
I can’t quite remember when I stumbled upon them first. Most probably it was the 1973 release of The Charwoman’s Shadow, a Lord Dunsany fantasy about a cleaning lady whose shadow is imprisoned by the magician she worked for.

It was, quite simply, like nothing I’d read before: the seemingly mundane characters, the Gervasio Gallardo cover, Dunsany’s beautiful prose. So I began looking for more.
You have to understand, fantasy publishing was pretty limited back then, predominantly short-story collections, Andre Norton books (which I love) and Robert E. Howard. In those very pre-Internet days, to find something that wasn’t available on a bookstore shelf, I had to a)find a publishing house; b)order a catalog, which required paying as much as the price of a book; c)then ordering the book, made insanely expensive by shipping and handling (or so it seemed to my budget). To have these amazingly different, imaginative, excellent books available was like a gift from Heaven.

I’d never read anything like George MacDonald’s allegorical Lilith, or the cover by Gallardo again (Carter wanted covers that looked as distinctive as the books). Or Clark Ashton Smith’s stylized dark fantasies. James Branch Cabell’s cynical tales of less-than-noble knights. Ernest Bramah’s whimsical stories of the Far East. George Meredith’s The Shaving of Shagpat. And newer authors such as Saunders Anne Laubenthal, whose Excalibur is the only Grail quest set in Mobile Alabama (Gallardo cover again), Evangeline Walton and a then-new Katherine Kurtz. 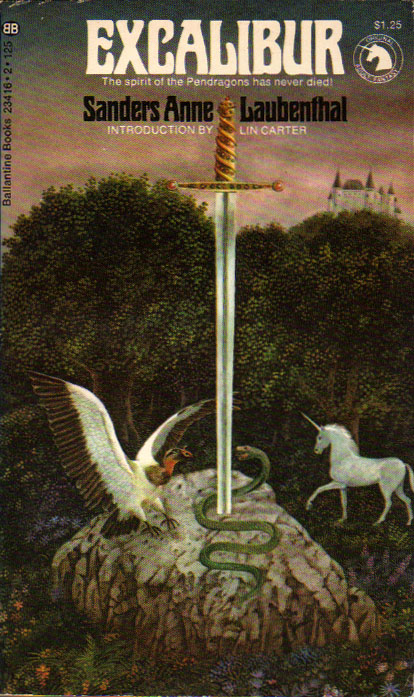 My concept of what fantasy was changed permanently. I’m not sure it affected my writing much (my failed attempts to write Dunsanian prose are mercifully long in my past), but they gave me a wonderful time reading, and still do. If you’ve followed my weekend book reviews, you may have noticed I’ve been rereading a lot of these guys, though I have many books yet to go.
I don’t believe Carter or Ian or Betty Ballantine are still around, but wherever they are, I’m grateful.