To the stars – and also to New Jersey: movies viewed

BEYOND THE SKY (2018) has a UFO skeptic (“My father claimed mom never came back because she was abducted — I’m going to prove that’s just another of his lies.”) falling for a young woman who claims she was abducted when she turned seven, then at 14 — and her 21st birthday is just a few days off. For most of its running time this is a watchable, if unremarkable film but then the ending makes it memorable, but not in a good way: first we have a human implanting false memories of abduction for some incomprehensible reason, then it turns out Aliens Are Real (or are the last 20 minutes just an implanted hallucination?). This is one of several movies using the fringe UFO theory that aliens are actually time travelers (in this case future humans trying to understand the emotions they’ve bred out of themselves). “Back in the MK Ultra days it was trial and error, but now we’ve got it down to a science.” 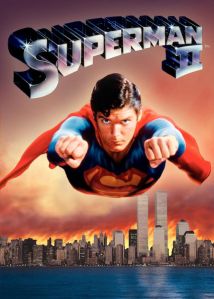 SUPERMAN II (1980) is a sequel that holds up favorably to the original, as Clark and Lois become more than friends while Luthor liberates General Zod (Terence Stamp) and his allies from the Phantom Zone to get revenge on Superman. I was too distracted watching to enjoy it as much as it deserves, but I’m really impressed with how well they pull off the parallel plotlines, so that the film stays interesting even with Superman largely out of costume for the first half. A lot of the credit goes to the cast — in one scene, where Chris Reeve’s Superman actually gets hurt, his stunned incredulity is absolutely pitch-perfect. The battle is smaller scale than the spectacle of Man of Steel but it also has more heart and drama, treating the bystanders as people, not just figures in a video game. All that said, the ending hand-wave to reset a lot of the events in the film annoyed me seeing it on the big screen and hasn’t improved. “Your father and I tried to anticipate your every question, Kal-El. This is the one we had hoped you would not ask.”

I stuck my DVD of CASABLANCA (1942) into the player when I got tired of watching movies for Alien Visitors and didn’t feel like reading either. No question, it was the right choice — the story of Humphrey Bogart’s Rick discovering lost love Ilsa (Ingrid Bergman) has walked into his bar out of all the bars in the world, and what followed after that, never disappoints me (I have a fuller review from the last time I watched it). And man, wouldn’t it be great if we could defeat fascism just by singing Le Marseillaise? Always a pleasure; Claude Rains, Sidney Greenstreet, Paul Henreid, SZ Sakall, Conrad Veidt and Peter Lorre make it that much more of one. “How extravagant you are, throwing away women like that. One day they might be scarce.” 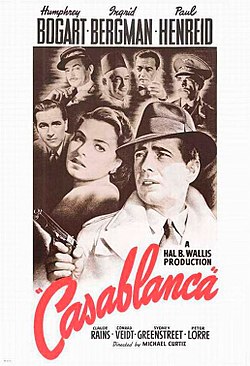 I got so little pleasure out of JERSEY BOYS (2014) that I gave up after an hour. The story of the Four Seasons was a successful jukebox musical on stage, but Clint Eastwood’s film version is a standard-issue musical biopic as four Jersey lowlifes and petty crooks rise into a celebrated super-group, though their career is marked by conflict, adultery and tragedy. I usually like Eastwood’s directing, but this never rose above cliches. “If you’re Italian, your name has to end in a vowel.”