Reading DC’s omnibus of WW’s depowered period, it’s surprising to realize that Wonder Woman/Superman didn’t become a thing until she lost her powers. That’s weird, right? I mean the only reason for shipping them is that he’s the one man on Earth strong and awesome enough to match her, right? Yet outside of one scene in Wonder Woman #130, where she goes on a date with Superman to torment Steve, Superman/WW was never a thing until she lost her powers (yes, this is another spotlight on Diana Prince’s martial-arts phase, which now have their own tag “The Diana Prince Years”). 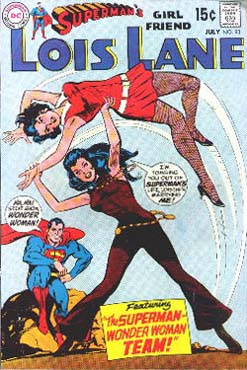 In Superman’s Girlfriend Lois Lane #93, by former WW scribe Robert Kanigher, it turns out Lois has been nagged for years by fear about Wonder Woman winning Superman, but fortunately she’s now powerless so no problemo! Nevertheless, when Wonder Woman asks for help regaining her powers, Lois agrees (contrary to the new canon in Wonder Woman, everyone knows Diana Prince is the superhero formerly known as Wonder Woman). Before long, Diana and Superman are having a torrid affair then headed for the altar. Fortunately it turns out the villain is a Phantom Zone escapee out to kill Superman, and he’d decided not to go through with it anyway. It is not a good story.

There have been multiple stories between then and the New 52 (where Lois is back with Superman, in case you had any doubts), almost all either a trick of some sort: magical compulsion or a ruse they’re playing on the villain (Brian Cronin tracks them all here).  And I’m okay with that. As I said when I read Superman/Wonder Woman: Power Couple, they work great as buddies; I’d happily read a World’s Finest-type team up book where Superman and Wonder Woman worked together the way Superman and Batman have, but not as a couple.

For one thing, Superman/Lois has been a thing forever. He’s had other loves here and there, but there’s never really been a question of anyone besides Lois ending up with him. For another, the underlying idea annoys me. It implies that WW could never accept a man as ordinary as Steve; she’s got to be with the one man who’s even stronger than she is. From Diana’s perspective, I think that’s wrong; whatever her standards for lovers are (something that hasn’t been tackled enough in recent years), they’re probably better than “wow, what a big strong man!” (although of course Superman has many other excellent traits himself). Hell, the Golden-Age version flatly ruled out loving a man stronger than she was.

Like a lot of bad ideas in comics, this one seems much more heavily shipped by creators than fans, though I could be wrong.

And while we’re on the subject of team-ups, I’ll run over the others in Wonder Woman Diana Prince: Celebrating the ’60s Omnibus:

“The Widow Maker” in Brave and the Bold #87. When Bruce Wayne enters an auto race, someone tries sabotage and violence to get him out of it. Batman steps in for the too-injured-to-race Bruce; I Ching and Diana, attending the race, help stop the bad guys. It’s written and drawn by Mike Sekowsky and fits with his work on the regular Wonder Woman at the time.

“Now Comes Zond” in Adventure #397, also written by Sekowsky. Supergirl tries to save a young woman from a cult led by the occultist Zond. When Zond kicks her butt with magic, she asks Supergirl to put her in touch with Morgana, the witch she battled in her neighborhood. Morgana is less than thrilled until she learns who they’re fighting: Zond was her mother Morgan leFay’s stableboy who stole some of Morgan’s scrolls and set himself up as a wizard. It doesn’t go well for Zond after that.

Oh, and as Supergirl’s costume was torn in her fight with Zond, Diana also takes her and Morgana to the boutique for some new outfits (Supergirl’s, as noted in the illustration, was designed by a reader, something comics have done for years).

Denny O’Neil turns in a forgettable story in World’s Finest #204, “Journey to the End of Hope.” A future computer asks Superman and Diana to change Earth’s doom by averting a man’s death at a protest. They save one man, but another dies — how can they know if they saved the right one? It’s clunky and the thugs they’re dealing with aren’t worth of Diana’s time, let alone the Man of Steel’s.

Last, from Brave and the Bold #105, we have “Play Now … Die Later.” A beautiful woman asks Bruce to ransom her father, a prominent pro-democracy activist in Latin America. Bruce thinks it’s a scam but as Batman discovers the man really has been kidnapped. Diana’s in this one, but she might as well have been Rene Montoya or Generic Female Cop for all the difference it makes.

Next up, Wonder Woman in China!

Tagged as The Diana Prince Years