BATMAN: The Resurrection of R’As al Ghul by Grant Morrison and others has R’as return from the dead (again) with a plan to use his grandchild Damien to give him a new body. So as Batman’s child, Damien (and his mother Talia) naturally turn to Bruce for help … This is one of the better stretches of Grant Morrison’s run on Batman.

SUPERMAN/WONDER WOMAN: Power Couple by Charles Soule and Tony Daniels is a near miss for me. While I’m not a fan of the relationship (Lois/Supes 4ever!), the early scenes with the couple (and Batman kibbitzing) work so well I’d have loved if this were a World’s Finest type series with the two of them working together as friends. But it isn’t, and the relationship angst bogs things down as it goes along. Worse, the villain is Zod, and nobody’s figured out anything interesting to do with him since Superman II: he’s a ruthless conqueror who loves his woman Faora, and that’s all the characterization I think he’s ever gotten (which wouldn’t be so bad, but he’s been used in Lois and Clark, Smallville, pre-reboot Superman and now the New 52 without anything fresh). So thumbs down on points. 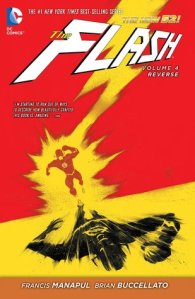 FLASH: Reverse by Francis Manapul and Brian Buccellato (cover by Buccellato, rights with current holder) has Barry moving in with his girlfriend Patty just as a mysterious Someone starts draining the Speed Force (the source for Flash’s powers) away from the people it’s touched, including his close friend Iris. This is definitely one of the better books in the New 52 (though I don’t know how it’s doing since the creators left) but the Reverse-Flash is too much a generic psycho (with, of course, a Tragic Abused Past) to work as well for me as the original villain.

One response to “And more graphic novels (#SFWApro)”