A smuggler, a teen detective and a power struggle: movies viewed

SOLO (2018) is, of course, the story of how young Han (Alden Ehrenreich) got a Wookie BFF, won the Millennium Falcon from Lando Calrissian (Donald Glover), lost his Great Love (Emilia Clarke), made the Kessel run in twelve parsecs and shot first (doing so in the final showdown with Woody Harrelson can’t be unintentional). This was a lot of fun, but not entirely satisfying — my big problem is that Han comes off too noble an anti-hero to be the money-hungry cynic and crook of A New Hope.  With Thandie Newton as a crime lord. “Did you forget? Never trust anyone.”

NANCY DREW — DETECTIVE (1938) stars Bonita Granville as an impetuous Nancy, convinced the mysterious disappearance of an old spinster right before she could donate her wealth to Nancy’s school is a sign of something sinister (spoiler: she’s right). While I’m not terribly familiar with the Carolyn Keene novels, Granville’s wide-eyed naif seems less like the book version and closer to amateur female sleuths like Deanna Durbin in Lady on a Train. This has the odd catchphrase “I’ll bet you $23.80” (supposedly it’s a standard WPA weekly paycheck) and I wonder if Nancy driving her own car didn’t have different meaning back then (it’s common today for a teen, but I imagine it must have been an unattainble fantasy during the Depression). “The password was bluebell — and a bluebell is also a larkspur.” 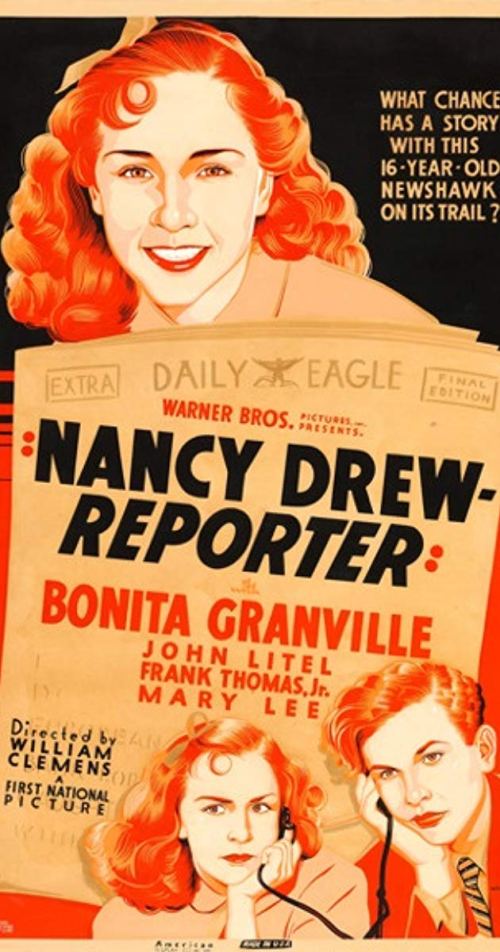 Granville becomes NANCY DREW — REPORTER (1939) as part of a school competition, then contrives to cover a sensational murder trial in which her woman’s intuition tells her the accused is innocent. Trying to prove otherwise, of course, plunges her and quasi-boyfriend John Litel (they don’t seem to be dating, but she’s quite possessive of him) into deadly danger, not to mention boxing. This was an improvement on the first film. “The man had a cauliflower ear.”

SKIN GAME (1931) is another of those stiff upper lip dramas Hitchcock seems to have made in his early career, a stagebound adaptation of a John Galsworthy play (even Juno and the Paycock opened the sets better). Ed Gwenn gives an excellent turn as a man of business whose plans for a country village put him on a collision course with the local squire, with both of them playing increasing hardball until a tragedy ensues. Better than Easy Virtue, but if this had become a lost film, cinema would not have suffered.. “Papa, may I spit in his eye?”

3 responses to “A smuggler, a teen detective and a power struggle: movies viewed”