Undead sexist cliches: “Women never do anything for political reasons”

If I remember correctly, I ran across that phrase in Marjorie Rosen’s Popcorn Venus. Rosen’s point (or whoever, if I’m misremembering) was that in movies, men fight for ideal (or power), women fight for men, or for ideals if men share them.

In Adventures of Robin Hood, for example, Errol Flynn’s Robin opens Maid Marian’s (Olivia de Haviland) eyes to the injustice King John and Guy of Gisborne are wreaking on the Saxons. She’s inspired, but it’s in large part by her love for Robin. In Casablanca, Victor Lazlo’s the idealist, Rick’s an idealist who needs to regain his ideals, Ilsa takes her cue from the men. She goes off to support Victor’s fight against the Axis because Rick told her it was the right thing to do.

In more recent times we have the Helen Slater Supergirl film, wherein her clash with Faye Dunaway comes off less about Faye Dunaway’s plans for world conquest and more about which of them gets to cuddle with hunky Hart Bochner. Or Paycheck, in which Ben Affleck is out to stop Aaron Eckhart’s evil plans, Uma Thurman is out to love Affleck. She’s willing to fight, but only because she’s supporting her man.

Heather Greene’s Bell, Book and Camera makes the same point about witches. Male film witches are out for power (e.g., Julian Sands in Warlock); female witches’ endgame is love (Bell, Book and Candle or I Married a Witch for example).

And as writer Shannon Thompson says, female villains are often defined by wanting the same guy as the protagonist: “When girls get antagonistic roles at all, it is usually as the dreaded other woman. She’s the soulless, vicious, popular harpy you love to hate, prepackaged in the designer clothes you’ve always wanted (but you’d never admit it), and she is on her way to steal your man.”  Of course, a lot of villains are out to get the girl, but it’s never just about the girl. Conrad Veidt in Thief of Baghdad is in love with the same princess as the hero, but he’s about getting power, too. Ditto Guy of Gisborne in the Flynn Robin Hood.

Or consider DC in the Silver Age, when Supergirl and Wonder Woman got saddles with lots of romance-comics tropes in the 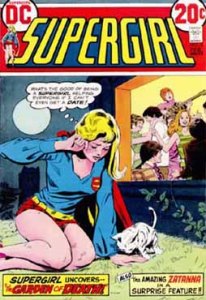 hopes of bringing in more female readers. Sure, Supergirl saves the world but what good is that if you don’t have a date?

I do think things have improved since Popcorn Venus came out 50 years or so ago. We have more women soldiers, more women PIs and cops, more female superheroes, and I see more of them whose motives do not revolve around the man in their lives, if there even is one. Even back in the 1940s, we had Wonder Woman, and C.L. Moore’s Jirel of Joiry. The CW’s Supergirl fights for truth, justice and the American way, not for a boyfriend, even though romance plays a role in the series.

This is a good thing.