“The Amazing Amazon as you’ve seen her before!” 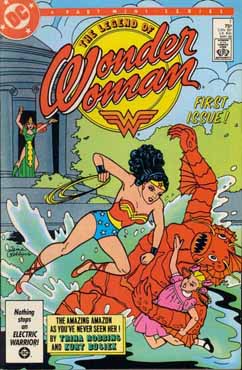 That’s how Trina Robbins and Kurt Busiek described their four-issue mini, The Legend of Wonder Woman which came out immediately following the end of WW’s series in 1986. Despite the “never” on the cover, this was a deliberate call back to the Golden Age Wonder Woman: her villains, the style of art (Robbins, who co-plotted, does a great H.G. Peters). And what Robbins describes as the key to her appeal to girls back then: “a superior female character who had … trips to fantastic lost kingdoms and meetings with beautiful (and often evil) queens and empresses.”

At the same time, it has a lot of the visuals associated with the modern Wonder Woman (i.e., the one who starred in the book from the Silver Age through 1986) such as her chest emblem being a modified WW rather than an American eagle.

As Busiek put it in one of the text pages, the post-Crisis universe erased both the Earth-One and Earth-Two Wonder Women from continuity, so they were free for those four issues to ignore the little details.

The story starts after Diana’s death in Crisis on Infinite Earths (following the original proposal to make her a statue; apparently turning her back into clay was a last-minute switch). With the Amazons dispirited, Hippolyta (the blonde Earth-One version) uses the time-scanning magic sphere to recall one of Wonder Woman’s adventures. Atomia, the tyrant of a subatomic universe, appears and attacks Paradise Island and the world with her nuclear based powers and warriors. The Amazons and Steve Trevor are kidnapped and turned into slaves in the process. Caught up in all this is Suzie, a pre-teen girl Wonder Woman wound up babysitting. Suzie is a restless, spoiled child who’s torn between Atomia, who lets her do whatever she wands and then some, and Wonder Woman. Ultimately, of course, she chooses the side of good (it’s nicer!) and helps WW and Steve win.

After telling the tale, Hippolyta discovers not only are the Amazons not inspired, they’re confused: there’s never been a child on Paradise Island. Athena? reveals she’s 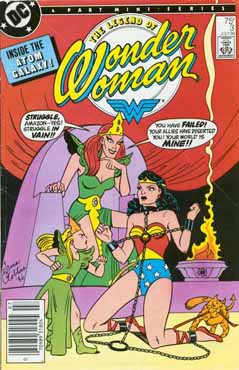 been holding off the reality-altering effects of the Crisis but now they’re sweeping in. The Amazons are erased, but Athena promises something awesome will rise …

I didn’t care much for the story when I first read it, but I liked it a lot more this time, possibly because I’ve grown fonder of the Golden Age Wonder Woman in the years since first reading. This may explain why I found myself thinking “for a Golden Age tribute, shouldn’t there be more bondage?” Though we did get the cover of #3. The tribute still didn’t match the level of the last few years of the regular comic, but I did enjoy it, and it does catch a lot of the Golden Age feel. Suzie was Busiek’s creation but became Robbins’ surrogate, the girl having the adventures with Princess Diana Robbins would have loved to experience at that age.

Despite DC playing up Jodi Picoult as one of the first women to write Wonder Woman, women have been scripting her since 1945: William Marston’s secretary Joye Murchison, Dani Thomas co-writing with her husband Roy and Mindi Newell write before Wonder Woman ended (I believe there may have been some other uncredited female writers over the years). That’s still a small list but “one of the few” would have been a more accurate phrasing.

Following the finish of Legends of Wonder Woman came the George Perez-helmed reboot. I’ll be back in a few weeks when I review the initial six-issue arc.

2 responses to ““The Amazing Amazon as you’ve seen her before!””