Not a dream, not a hoax, not an imaginary story: Wonder Woman marries Steve Trevor!

When Dan Mishkin took over as writer in 1983, the clock was ticking. DC was already working on the buildup to Crisis on Infinite Earths, in which both the Earth-1 and Earth-2 Wonder Woman would cease to exist, with a new George Perez-helmed reboot replacing them (I’ll get into the parallel-Earths aspect of WW in another post). I’m not sure if Mishkin knew Wonder Woman was living on borrowed time, but he certainly gave it his all. In his 25 issues, we got — 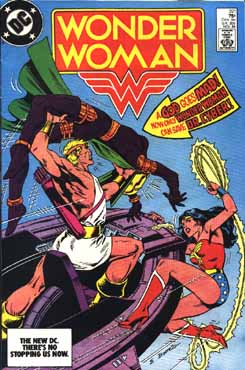 And Diana and Steve finally learn that he’s the second Steve Trevor in her life. They don’t take Hippolyta hiding the truth about Steve and messing with their memories at all well. And Mishkin does a remarkable job working out the tangled history of Steve’s lives and deaths in an arc that involves the god Eros and fuses the memories of the first and second Steve together.

And then we got two much less interesting issues by Mindy Newell. Etta suddenly blows up at Diana (her roommates), and we get to meet several new characters who aren’t very interesting and take time away from Diana and Steve. There’s also a plotline on the Amazons rejecting Hippolyta’s rule. All of that might have paid off if Newell had more time to develop whatever her ideas were, but she started with four issues left to run. I do wonder if they hadn’t decided on the reboot yet; if she figured “screw it, I’ll just write this the way I want”; or if making it look like a new arc was starting was to make the big finish more of a twist.

And big it was. In Newell’s last issue, the Anti-Monitor’s shadow demons attack Paradise Island while the rest of the world starts to fall apart too. It’s a lot livelier. Then came the big finish #329, by Gerry Conway.

And big it was. Hades, Ares and the Anti-Monitor launch an attack on Olympus. Wonder Woman arrives on Paradise Island, where her Mom 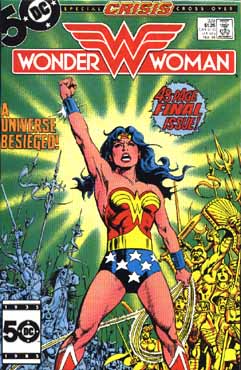 has given up hope. Diana swings her around and unites the Amazons for a final battle to defend the gods. Steve insists on going along: after everything they’ve been through, he’s not letting his “angel” go now. With Persephone (by her alternative name of Kore) convincing Hades to switch sides and Steve freeing the gods from Ares’ prison, the good guys win, though with a nasty body count (not an issue when it’s all going to be wiped away, after all). But the Anti-Monitor is still out there, so Diana has to head off to the last issue of Crisis; before she goes, though, she and Steve ask Zeus to marry them (I’d forgotten that when I wrote about Diana’s lack of a love life).

It’s a cool ending, but an ending it was. In Crisis, the Anti-Monitor’s blast transforms Diana back into the clay that formed her. Then the reshuffling of the universe into the post-Crisis reality (sometimes referred to as “New Earth”) erased her existence and that of the Earth-Two Golden Age Wonder Woman (who lived, but vanished from the ken of mortals into Earth Two’s Olympus),  In the new timeline, Diana comes to America a decade or so after Superman launched the heroic age. Unlike Superman and Batman, whose books continued without a break, Wonder Woman’s title was off the stands for a year (I always thought that was a shame). Before the Perez version debuted, we got a miniseries, Legend of Wonder Woman, which will be my next reread.

3 responses to “Not a dream, not a hoax, not an imaginary story: Wonder Woman marries Steve Trevor!”