So this is Dragoncon (#SFWApro)

TYG and I just accomplished one of my longstanding goals to finally attend Dragoncon, the Atlanta SF/fantasy festival.
It was great fun, though slightly disappointing: I have friends who are so ecstatic about it, so it was a bit of a letdown I wasn’t as blown away. But expectations aside, TYG and I had a good time and we’re planning to go again next year.
Highpoints:
•Visiting the Atlanta Aquarium. It’s the world’s largest. There are many amazing fish and sea creatures including dolphins, beluga whales, the only whale sharks on exhibit in the US, electric eels and anemones. 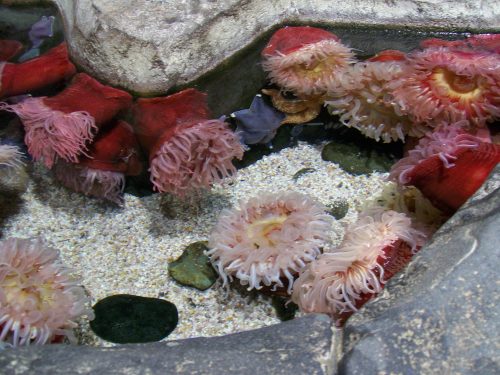 Plus garden eels, which project out of the sand, as you can see. 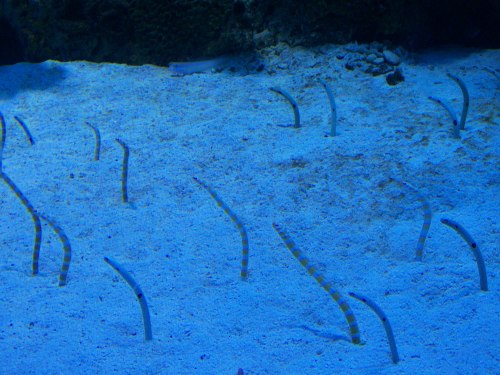 •I almost walked into Terry Farrell and, of course, apologized. She said something like “You’re fine,” which means TERRY FARRELL SPOKE TO ME! Squeee, crush kicks in!
•Listening to David Warner and Malcolm McDowell reminisce about Time After Time. And Eliza Dushku and a couple of other cast members hold a Dollhouse retrospective.
•Discussions of “Magic in Urban Fantasy,” “Magic in Alternate History” and other topics useful to my writing (I’ll be covering them in more detail later this week).
•Hanging out with my Dragoncon-loving friends, many of whom I haven’t seen in more than a year. And I miss them.
•Admiring cosplay, of course. Other than steampunk, the dominant influences seemed to be Doctor Who and comics, with everyone from Superman to Blue Lantern to Giant Man and the Wasp turning up. And to anyone at DC or Marvel who still thinks their audience as all-male, the Zatannas, Supergirls, Wasps, Wonder Women, Batgirls, Sifs, Black Widows, Robins and cross-dressed female Thors, Batmans, Blue Lanterns, Jokers and Riddlers say you’re clueless (Robin does not count as cross-dressed because we’ve had a couple of female Robins already).
One reason I didn’t enjoy it as much as expected may be that we had a really crazy Thursday, when we flew down (I won’t detail) so we started off on a sour note. And staying at an overflow hotel near the airport and shuttling or MARTA-ing to the downtown meant we couldn’t just pop up to our room and crash for a bit if we needed it. I wound up with a ton of books I’d picked up Thursday, my iPad satchel (it has the excellent Dragoncon app for coordinating schedules, mapping the hotels and finding friends’ schedules) was heavy and there was really nowhere to put it without taking an hour to go back to the hotel and then back into the game. We’re going to try landing somewhere closer next year (though the Airport Hilton was all-around excellent).
If you decide to go, I highly, highly recommend good walking shoes. There’s a lot of walking, and lots of standing. And snacks: there are plenty of places to eat but the crowds and lines can be a drag. I made trail mix and I’m glad I did.
Sexual harassment, as I’d heard, can be a problem too. I heard a couple of female cosplayers mention that they’d been asked if they were prostitutes, as their costumes involved corsets and cleavage. I imagine they weren’t only ones.
One brief film clip filling space before the Time After Time panel started also had a great response to the fake girl geek bullshit: A fake geek is anyone who doesn’t like what you like. A fake geek is anyone who likes stuff you don’t like. A fake geek is anyone who likes stuff you like but doesn’t like it enough. A fake geek is anyone who doesn’t bite the heads off chickens.
We’re now back home and recuperating—the walk to the Aquarium followed by two-plus hours walking around it was exhausting. And now, dinner is calling.

2 responses to “So this is Dragoncon (#SFWApro)”