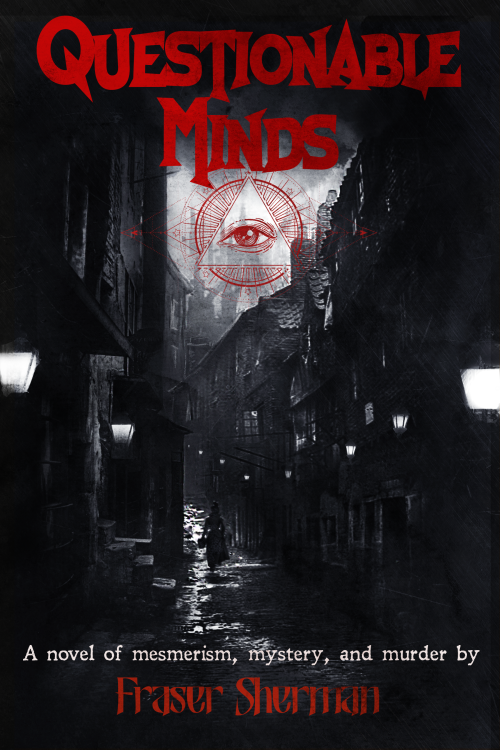 We meet the primary villain of Questionable Minds at the end of the first chapter. First we encounter my protagonist, Simon, at a tense dinner party. Then we meet Polly Nichols, a broken down woman desperate to turn a trick so she’ll have money to pay for a bed for the night.

Unlike the real Polly Nichols — the first victim of Jack the Ripper — this Polly is a mentalist, a “human telegraph” with the power to read thoughts. Trouble is, Victorian snobbery, as I’ve mentioned before, believes the lower classes are fit only to wield gross physical powers such as TK or firestarting (AKA levitation and incendiary). A woman at the rock-bottom of the social order isn’t to be trusted with telepathic ability so she was turned out of the Academy with only a little training.

The result? Polly has a half-formed ability that only picks up thoughts about her, and only negative ones. Her power amplifies even the slightest, fleeting touch of resentment or discomfort and convinces her she’s despised. She’s alienated from everyone, and she’s miserable.

Then she meets Jack and falls in love. Instantly. She happily follows him to a dark spot on the street where he butchers her (I do not use the term casually. There’ll be a trigger warning for violence against women). She’s too happy to resist.

Scotland Yard’s Mentalist Investigation Department initially turns down the Nichols case: there’s no sign that Jack used any sort of mental powers and that’s their field of interest. Simon, however, has the freedom to investigate unofficially and learns some strangely suspicious details. Still, the MID has bigger fish to fry, a telegrapher who’s obtained documents about important international negotiations — the odd murder of one mentalist is hardly in the same league. But then a second murder happens. Psychic probing reveals the victim was in love, so in love she let the murderer kill her. And it’s only getting worse from there.

In the first “finished” version of the novel, I had Jack’s POV crop up in multiple scenes throughout the book, giving some explanation of his motive and showing his mindset. The brutality of the killings is a ruse, to distract the police from his real agenda — but Jack’s POV scenes show he’s lying to himself. He’s a raging misogynist and he’s getting off on cutting women up.

That still comes across, I hope, despite my cutting out most of Jack’s POV scenes. In the years since I wrote the earlier version, I’ve come to dislike villain POVs. Not always, but with serial killers in particular it’s pretty tedious stuff. His superiority, his gloating about the sheeple around him who are his unwitting prey, etc. My guy’s definitely not like that, but even so I wasn’t sure the scenes were necessary. I cut almost all of them.

That’s about all I can say without giving away major spoilers, so I hope it’s enough.