Lost in the maze of replotting 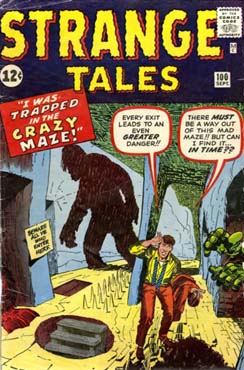 So as I mentioned last week, I added another 12,000 words to the current redraft of my superhero novel, Impossible Takes a Little Longer. That was easy because I transplanted most of it straight from the previous draft. I like the scenes; it makes for a dramatic reveal to one of the key points in the story; and it adds a good chunk of characterization to KC’s backstory.

The trouble is, it fits very awkwardly with the new material coming before it. And that material, itself, hasn’t given me an “ah, I see where to go next feeling.”

In the original plot, KC Rogers, AKA the Champion, is targeted by Lahatiel, a metahuman—a paranormal, in my setting—who claims to be an avenging angel. She takes him down, but it soon becomes obvious there’s a bigger adversary backing him. In reality there isn’t, but in investigating who might be behind him, KC draws the attention of a number of people: Captain Wonder, the world’s strongest hero; Darla Jeffries, the mayor of New York (a villain in earlier drafts, now more of an antihero); and the archvillain of the novel. Hilarity does not ensure.

In the redraft, Lahatiel doesn’t target KC; instead he goes after her BFF, Sarah Wyzbecki. This ups the stakes as Sarah doesn’t have KC’s superpowers to fight back with. Lahatiel realizes he needs to eliminate KC first and tries to do so, but it doesn’t go well for him. Lahatiel goes down and it appears the threat is over.

It’s a good mini-arc but as neither KC nor Sarah is still under threat at the end of it, the plot tension sags. That’s not a fatal flaw — it’s just a pause before things start getting more intense — but the plot now feels like it’s going in a completely unrelated direction. The next arc brings Jeffries and a couple of other characters on stage and jacks up the threat level a lot, but the threat doesn’t feel as organically connected to my villain as in my earlier drafts. And the outcome of that second arc, which includes KC’s identity as Champion getting exposed, doesn’t flow smoothly into the old material.

Another plot point I’m having trouble with is that Sarah will disappear, not by choice, from a large chunk of the book. The sooner it happens, the more pain for KC, but given everything else going on, it’s hard for me to believe she’ll keep going without a complete breakdown. Another problem is that KC and Sarah make a great pair of buddies; I want as much of them in the book as possible, which argues for pushing it back in time. Plus, the deeper I make the friendship, the more impact Sarah’s loss will have for readers.

Yet another change I’m not sure about is keeping more of the book set in the Florida Panhandle (though my writing will not capture how pretty some of it, like the shot at left, are). In all the previous drafts, KC travels to New York to ask Captain Wonder to team up with her. This brings her into contact with the nemesis and with Jeffries. Last draft, though, this didn’t work at all. She didn’t have the same motivation for asking Wonder’s help, and even less in the current one. Nor are KC and Jeffries going to be in conflict the way I’d originally seen it.

In the new draft, Jeffries comes to Ft. Walton Beach to recruit KC to fight a misogynist paranormal committing acts of sabotage in NYC (it’s the book’s big bad, though neither of them knows it). Trouble is, there’s another powerful paranormal taking interest in KC, and possibly Captain Wonder showing up in FWB as well. That gets absurd, almost at Chosen One levels (i.e., everyone knows KC is the central character) and KC simply isn’t that. I want Captain Wonder in the book, so perhaps have KC investigate things in New York and then meet her? That would work better, except as KC points out, she’s a hitter, not a detective; until she has someone to punch, there’s not much I can think of for her to do.

This is all solvable but I admit I’m impatient to get it worked out. I put a good deal of time into plotting out this draft in the hopes I could get it done faster. I’m not entirely surprised that didn’t work, but it would have been nice.

#SFWApro. Cover by Jack Kirby with inks by Steve Ditko, all rights remain with current holder.

One response to “Lost in the maze of replotting”