Not a great week for ET movies

Area 51 is part of modern UFO mythology but AREA 51 (2015) doesn’t do it justice (it doesn’t do anything justice). A clunker of a found-footage film in which a quartet of young adults decide to sneak into the legendary government base. First, however, they spend a half-hour or more partying and joshing around, then they have to prep for the caper, then finally we get into Area 51, wandering around and gasping at the Amazing Alien Artifact before Bad Things Happen (as with a lot of found-footage films, it’s unclear what. Even as a talking lamp, this was a waste of time.  “It’s in the Bible, it’s Ezekiel — the chariots in the sky.”

THE GIANT CLAW (1957) isn’t a good movie but it’s a lot memorable, if only because the monster — an extraterrestrial giant bird protected from attack by an anti-matter force-field — is one of the worst ever, resembling the kaiju Rodan as re-imagined by Jim Henson. And the best name they can offer for it is the uninspiring “the bird.”

Otherwise the movie is a standard 1950s monster yarn — bird attacks, proves invulnerable, but eventually Jeff Morrow and Mara Corday figure it out. It would be merely mediocre, but that bird makes it something more. “What you’re saying in essence is black is white and two plus two makes six.”

X-MEN: Dark Phoenix (2019) follows up on X-Men: Apocalypse by showing that in the current timeline (resulting from the time shifts in Days of Future Past) the X-Men are admired heroes and Charles is a celebrity. Mystique suggests that’s biasing his judgment in sending the team out on increasingly risky missions. Sure enough, a dangerous space mission results in Jean coming home with a cosmic hitchhiker and becoming much, much more powerful; this in turn attracts the alien D’Bari, who want to convince her to destroy humanity so they can colonize the Earth. This is more fun than the preceding film and overall it’s at least as good as Last Stand (the previous attempt to adapt the Dark Phoenix story), but at the same time it’s nowhere near A-list; the D’Bari are generic and Jessica Chastain is colorless as their leader. “It’s so much easier to under stand your language when you’re not screaming.” 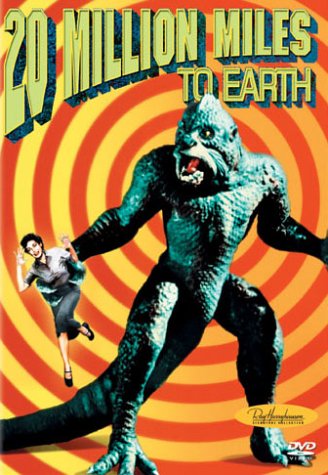 as a riff on the classic. Once again, humans (Paul Hopper) voyage into the unknown (Venus) to bring back an amazing beast (known as the Ymir backstage, just “the creature” in the film). It ends up shackled for human’s benefit (studying may show how to survive in the caustic Venusian atmosphere), breaks out and winds up in a showdown on top of a famous landmark (the Coliseum) before being brought down. It does not, however, carry female lead Joan Taylor with it.

As Bill Warren says in Keep Watching the Skies, this shows where Harryhausen falls short of Kong creators Meriam C. Cooper and Willis O’Brien: where they created something epic and classic, Harryhausen just made a monster movie. However Warren’s unfair to argue Ymir is just mindlessly destructive: like Kong he’s more sinned against than sinning (when confronted with a flock of sheep he doesn’t attack them because they’re not attacking him). And it’s quite a monster movie — a great creature, a rampage through Rome, Ymir battling an elephant — as Warren admits, whatever Harryhausen’s limits, there’s a reason his work is loved by millions. Definitely this week’s best. “That candle has burned down until it’s almost out.”

One response to “Not a great week for ET movies”