Post-apocalyptic adventures and a retconned Hulk

THE ATOMIC KNIGHTS by John Broome and Murphy Anderson was an early 1960s series in DC’s Strange Adventures, set after the devastating WW III of 1986. Anti-radiation treatments have protected humans from fallout, but all plant and animal life is gone. Canned food is the only source; give someone a stockpile of cans and the energy-weapons to protect it and people will crawl at his feet to feed their families.

Enter Gardner Grayle, literally the average man (the exact average of the atomic-age American soldier). When he discovers some ancient armor in a museum is proof against rayguns (a freak bit of metallurgy) he organizes the Atomic Knights, a Round Table type fellowship devoted to rebuilding civilization. Fighting against ignorance, battling petty tyrants and occasional oddness (alien invaders, time-tossed Atlanteans) they set out to remind a world of might-makes-right that might should serve right.

This series was a lot of fun, though a later retcon story in the 1980s felt that was unacceptable: nuclear war will be bad, it shouldn’t be written as a fun adventure. While it is certainly true that post-WW III won’t be gloriously exciting, I still love the series. Though they could have done better by the one female knight, Marene, who serves primarily as Gardner’s love-interest. 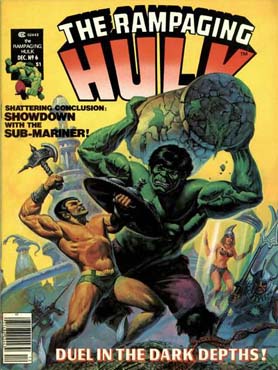 a black and white magazine released to cash in on the Hulk TV show). The story, involving the Hulk and sidekick Rick Jones battling some rather stupid alien invaders, didn’t grab me. What did was that it was a retcon set in the early Silver Age, with the Hulk running into the X-Men, Namor and the Avengers members in the period between his original book getting canceled (something Tom Brevoort discusses here) and his return in the first issue of Avengers.

That kind of retcon has become common since, but at the time I’d never seen anything like it. Sure, Roy Thomas set his Invaders back in WW II, but that continuity meant little to me back then; early Silver Age was my childhood, even if I was more DC than Marvel. Having Hulk interact with the original X-Men or Namor grieving after his people abandoned him was just soooo cool.

However as several older fans pointed out it was also quite discontinuous. When Hulk’s first series wrapped up Hulk was still speaking English (though rougher, more blue-collar English than Bruce Banner). Changing back and forth had nothing to do with his anger; he did it with a ray machine. Moench, however, wrote the Bronze Age Hulk who spoke pidgin and changed when he got angry. Whether it was low sales or the complaints, Moench wrapped up the storyline in #9 and switched to contemporary stories closer to the tone of the TV show. As I didn’t care for that era of the original series, I left it unfinished.