My week, demolished by dogs (Wisp helped too)

Having Tuesday sucked up by doctor visits was only part of the distractions from writing this week.

It started Saturday night, July 3. Some clodpates decided to launch fireworks to celebrate Independence Day Eve and Plushie freaked out. He crawled across the bed and began licking at my face for comfort, which is not so comfortable for me — I kept having to shift to avoid getting my mouth or my ears licked (ick!). And he wanted to jump off the bed, which would be bad for his ongoing recovery (more on which soon).

Sunday night, July 4, there were, of course, more fireworks and more of a freakout. My writing day Monday was ultra-groggy; I’d scheduled eight Leaf articles for myself and only finished six. Catching up took more time out of the rest of my week (I try for 10 a week. It covers my share of the bills handily).

Monday night, as I mentioned in this morning’s post, Wisp kept waking me up. Tuesday and Wednesday I just didn’t sleep well. Part of that is that the endodontist gave me antibiotics (there’s a slight infection around the site of my future root canal) and my mind keeps prodding me to get up at 3 AM so I take them on a regular schedule (it’s a four times a day thing), then I can’t get back to sleep.

Then Thursday, a friend called with a problem. They’d previously asked about us dog-sitting Lily and Tito as we’d done before, but for a longer stretch, Thursday to Tuesday (the dogs have never been boarded so the owners don’t want to do that if they can avoid it). Then they’d found someone who could house-sit with the dogs, so we didn’t have to get involved. Thursday their house-sitter got slapped with an emergency and it was too late to either take the dogs or board them, so could we … And of course we said yes. Needless to say, having two more dogs slows my work down to a crawl. Plus our weekly session with our dogs at the dog rehab place took much longer than anticipated. So Thursday was a wash as far as anything involving thinking. Today was too. 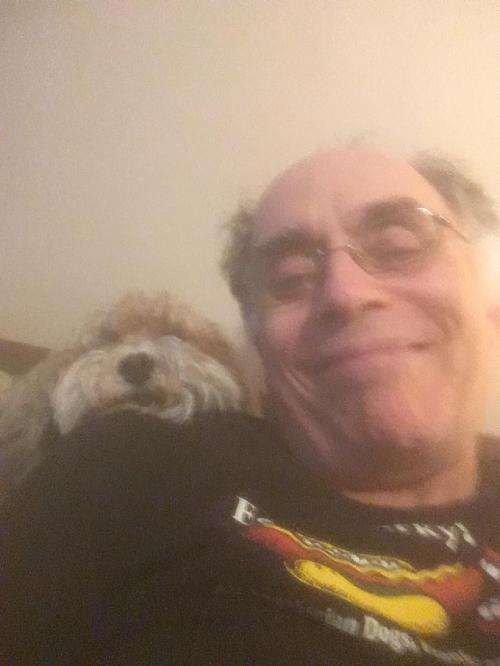 I did manage to read over Chapter Nine of Undead Sexist Cliches preparatory to rewriting it. I posted on Atomic Junkshop about the obscure Superman villain Zha-Vam (“Say his name and even Superman shakes!”) I got my ten Leafs done for the week, and watched a lot of movies for Alien Visitors. Didn’t get much writing done, though and I really need to. But there’s only so much that can be done when multiple dogs clamor for attention.

One response to “My week, demolished by dogs (Wisp helped too)”