A hip Amazon who swings? She’s not your mother’s Wonder Woman!

So a couple of weeks back I became proud possessor of WONDER WOMAN: Diana Prince: Celebrating the ’60s Omnibus which collects the complete run of her non-super years (1968 through 1972). As I’ve already reviewed the TPBs (Vols 1, 2 and 3 at least) thought I’d do it this time much the way I handle rereading the rest of her run, posting about story arcs and similar obvious benchmarks. So I’ll start with a focus on Wonder Woman #178; it’s a one-shot story that doesn’t really tie into the following arc (Diana’s still Wonder Woman, for instance) but does serve to alert readers to what’s coming

Wonder Woman’s Rival by Denny O’Neil and Mike Sekowsky opens with police arresting Steve Trevor for the murder of someone named Alex Block; Steve claims he has an alibi — a girl he met at a hippie nightclub called the Tangerine Trolley — but he didn’t get her name and can’t locate her. At the trial we learn Block met Wonder Woman and Steve at a party where the creep told WW she was a disgusting freak, then tried to grope her. Steve decked the dude. Later an emergency needing Amazon involvement ended a Steve/WW make-out session so he went to the club and flirted with the girl.

The prosecution’s case boils down to: Steve has no alibi, he beat up the guy and killing him was the one way he could feel like a man when hanging out with Wonder Woman (who, on the stand, testifies that Steve said Block was a rat who ought to end up dead). While comic-book jurisprudence has never worried much about legal procedure, this seems exceptionally unconvincing: motive yes, but no weapon, no evidence, nothing that ties Steve to the crime. I’m sure juries convicted decorated war heroes on that kind of evidence all the time (sarcasm font). However it works, and when Lt. Prince comes to see him, Steve confesses to being pissed at hell at Wonder Woman for betraying him. Because testifying truthfully is totally not what he should expect Wonder Woman to do on the stand, right? So Di decides if she can’t save Steve as Wonder Woman, she’ll save him as Diana Prince by finding that vanished girl. Which requires visiting clubs like the Tangerine Trolley, which will require Diana to blend in so she goes clothes shopping —

All of which is almost certainly modeled on Cornell Woolrich’s The Phantom Lady, a noir novel involving a wrongly accused man, an unnamed woman alibi and the guy’s lover trying to find her. And just as in Woolrich, someone’s determined to stop Diana cold. Eventually Diana does track down the girl, Tina, with the help of Steve’s best friend, Roger Seely. Unfortunately it turns out Roger is the killer, having murdered Block to cover his embezzlement of company funds. He tries to eliminate Diana and Tina to ensure Steve’s conviction stands, but of course, he doesn’t know he’s dealing with Wonder Woman … 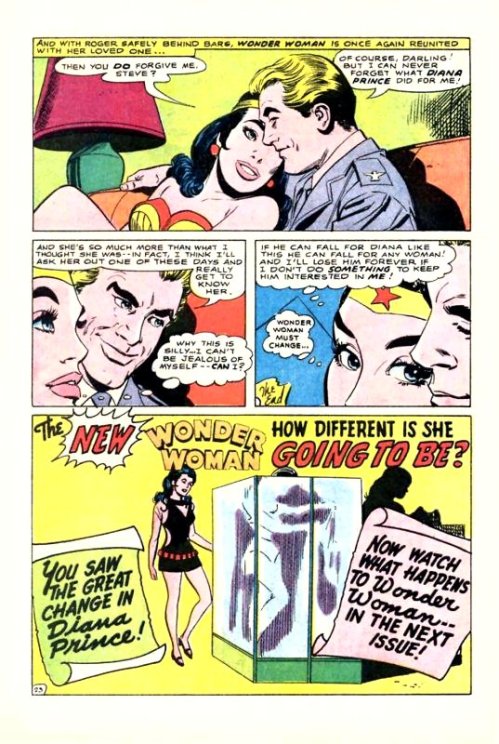 At the end Steve, as you can see, reconciles with Wonder Woman but tells her he’s so impressed with Diana, he wants to date her (one of the few times someone’s found the secret identity more desirable than the superhero). Wonder Woman worries that if he’s going to date other woman, his next pick might be someone who isn’t her secret identity.

None of this ties in to the following Dr. Cyber arc; in fact that last page has so little relation to the changes ahead I suspect O’Neil was pulling a fast one so that we’d be blindsided. At the same time it does establish a lot of the tone they were shooting for: cool fashion, hip contemporary settings and playing up the men in Diana’s life a lot more (of course the late Silver Age Wonder Woman had already gone heavy on romance-comics tropes).

As Kelly Sue DeConick says in the excellent intro to this volume, this is one of the big problems of this era of WW. In trying to remake WW into a Realistic Modern Woman (or close as a martial-arts mistress battling an international crime syndicate can get), O’Neil and Sekowsky frequently default to sexist tropes where good as Diana Prince is, she still needs a man to be the boss (something I discussed recently). Diana gets a buzz off all her new fashion, and she delights that guys are finding her attractive; you’d think she’d never had any identity but dull, drab Lt. Prince. Which is one of my own complaints about the adventures to follow, that not only would they work better if she were a new character, the creators often treat her that way.

On the plus side, Sekowsky’s art is some of his best and will continue to be so.

I’ll be back soon with the de-powered Wonder Woman’s first story arc, as she and “the incredible I Ching” (and boy, does he bring a heaping helping of problems to the story) take on the half-man, half-machine Dr. Cyber!

#SFWApro. All art by Sekowsky, all rights remain with current holder.

Tagged as The Diana Prince Years

2 responses to “A hip Amazon who swings? She’s not your mother’s Wonder Woman!”