Having picked up a copy of JOHN CARTER (2012) at Mysticon, I rewatched it (original review here) and once again wondered how such a striking movie failed to catch on. In contrast to Doc Savage, the Man of Bronze, this film handles its earnest, old-school source material right, without any impulse to camp it up or go over the top. The changes it does make for modern taste are good ones, such as Dejah Thoris (Lynn Collins) being a capable scientist and swordswoman rather than the helpless love interest on Michael Whelan’s memorable Princess of Mars cover. 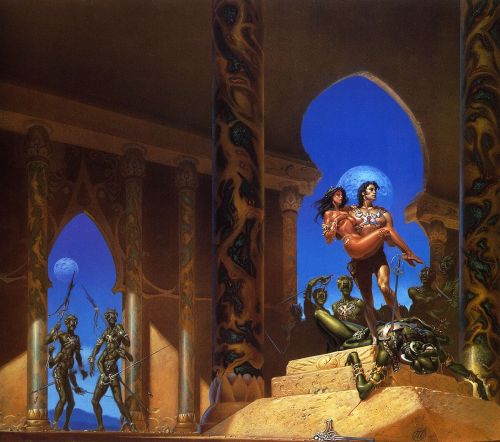 I noticed, while rewatching, that John Carter (Taylor Kitsch) doesn’t bat an eye at this: his initial impulse is to protect Dejah Thoris when the swords start swinging but when he sees she can handle herself, he’s not the least bit fazed, nor is he bothered she’s as capable as he is. That’s anachronistic for a 19th century Southern gentleman but I’d much sooner see that than having them waste screen time on Carter being a sexist ass. It’s a shame this movie didn’t make it, but hey, it’s a miracle we got a Barsoom this good. “All planets die. We just manage the process.”

QUADROON (1971) is one of the many films I saw intriguing ads for as a teen (“By the time I’m through, he’ll be too terrified for me — and too exhausted for his wife!”) but I can’t think of any that lived up to the image I had of them. This one, for example, is a serious and regrettably dull drama about mixed-race women in New Orleans whose heritage makes them misfits (a common stereotype) so their only hope is to find a wealthy man to keep them. The protagonist is a New Englander teaching the women literature but inevitably bringing on tragedy by falling for one of them. Whatever merits this might have had, the cast is too talentless to bring them out, and the ending is a downer. ”No matter how much you love him, do you think your skin will ever be white enough?”

Having recently read the novel The Ugly American (which I’ll discuss next week) I Netflixed the film version. THE UGLY AMERICAN (1963) takes the book’s fragmented and aimless plot and reshapes it into something more coherent but also more cliched: Marlon Brando plays an ambassador to Sarkhan in Southeast Asia who pushes his staff to overcome their weaknesses (get out into the community! Learn the language!) but his ability to thwart a communist takeover is hamstrung by his best friend having become the spearpoint of the revolution. Unlike the book, this really doesn’t stand out from any other film about Third World Cold War battles; Pat Hingle plays an engineer and Arthur Hill is a competent diplomant. “It’s rather like an overproduced version of Julius Caesar, isn’t it?”

One response to “Sexy Women and Ugly Americans: movies”