Discovering that DOC SAVAGE: The Man of Bronze (1975) was on Amazon streaming, I figured I might as well rewatch it. I remembered loving the fact Doc was on screen but feeling the execution was a little lacking. In hindsight, I was charitable. Starting with the fact that while star Ron Ely’s body does indeed look like a physical phenomenon he’s not even remotely bronze. 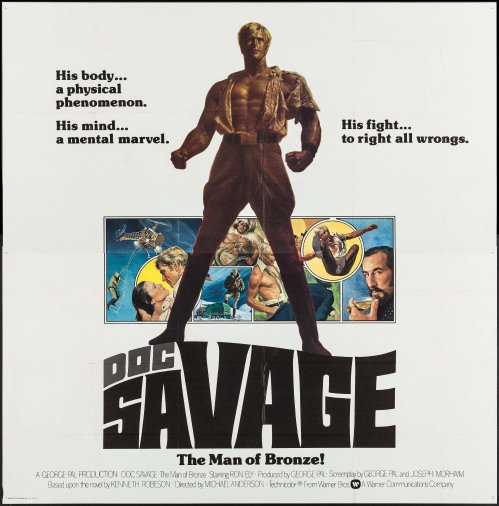 Not even a little. He’s a regular looking guy with normal pink flesh tones and blond hair instead of Doc’s bronze hair and permanent bronze tan. No eyes like whirling pools of flake gold, just a little f/x sparkle when he smiles at someone.

The film starts out as a fairly faithful adaptation of the first Doc novel, The Man of Bronze. Doc (Ron Ely) is at his Fortress of Solitude when he psychically senses

something bad has happened (I only said “fairly” faithful). He rushes back to New York to learn from his five buddies that his father died of a mysterious disease in a tiny Central American country called Hidalgo. Clark Savage Sr. mailed Doc some papers before his death; as Doc puts them in the safe, a Mayan with red-tipped fingers shoots at him from a neighboring skyscraper; Doc and his crew trap the man there, only to have him kill himself by leaping to his death. Returning to Doc’s office, they discover the documents are ash.

Doc and his crew set out for Hidalgo. A killer shoots down their plane, unaware it’s a remote-controlled fake, and reports back to Captain Seas (Paul Wexler), the big bad, that Doc and his crew have joined the choir invisible. When they show up in Hidalgo anyway, Seas (so named because of his globe-trotting quest for riches) has the pilot killed, using snakes made out of poison venom a la The Mystic Mullah.

Doc discovers his father left him a few acres in the center of the country but the deed has vanished. Seas invites Doc & Co. to dinner on his yacht, where he attempts to have them dispatched, disappointingly just by a bunch of gunmen. Doesn’t work. A young Hidalgo woman, Mona (Pamela Hensley, a lot less glam than she’d be a few years later in Buck Rogers) leads Doc to the Valley of the Vanished which holds a lost Mayan tribe and a pool of molten gold, which the tribe deeded to Savage Sr. in gratitude for his medical help. In the best traditions of 1940s movies involving native tribes, some of the Mayans are convinced Seas is their friend, so Doc is their enemy. Of course everything is cleared up, Doc gets the gold to finance his war on evil, kissed Mona and promises to return. End.

The synopsis makes this sound serviceable; the execution wasn’t. It’s about the level of the TV superhero movies of the era I covered in Cyborgs, Santa Claus and Satan and has the feel of being slightly self-conscious about its source material. Rather than play it with a completely straight face, it throws in just enough camp to show the creators know how silly this stuff is.

There’s the John Phillips Sousa march used as Doc Savage’s theme (“Have no fear/Doc Savage is here.”) and the climactic battle between Doc and Seas which is played pointlessly for comedy and way too drawn out. Given it’s fantastic elements (lost tribes, ghost snakes, molten gold volcanoes) it’s surprisingly bland. Much of that can be blamed on Ely, who was also bland as TV’s Tarzan for several years. His five aides are fairly decent, though not as physically freakish as the description, which would probably take some sort of CGI (Renny’s gallon-pail hands, for instance). The F/X We do get are unconvincing; the snakes move way too deliberately to be random puffs of vapor. There’s way too much As You Know exposition, like the guys discussing how the distorting glass in Doc’s office windows saves him from the shooter, even though they all know this.

A minor point is bringing up Doc’s crime college (Seas gets the surgical reform treatment). It’s certainly canon, but it is, as several comics series have acknowledged, something that doesn’t age well; it doesn’t bother me in the books but it’s creepy here.

The next movie, written by Philip José Farmer, sounds more promising, but with Ely in the lead it might not have been much better.

One response to “Doc Savage, Man of Flesh Tones? The 1975 movie”