The Victorian Past, the Unimaginable Future and parallel worlds

After reading Black Swine in the Sewers of Hampstead, I thought THE INVENTION OF MURDER: How the Victorians Revelled in Death and Detection and Created Modern Crime by Judith Flanders would provide more insight in the same vein. Unfortunately it’s more like a listicle of once-sensational crimes — a lot of them don’t stand out by today’s standards — and the press coverage and stage dramatizations that fed on the public’s interest in them. Black Swine had more insight into the Victorian psyche and Jess Nevins’ Fantastic Victoriana is more interesting on the development of crime and detective fiction. So I put this one down unfinished.

In his historical notes on Flashman, George Macdonald Fraser referenced A JOURNAL OF THE FIRST AFGHAN WAR by Lady Florentia Sale as a good source on the disastrous events in his novel; discovering TYG had a copy I finally got around to reading it. Writing in 1842, Sale chronicles a long string of missteps and bad judgments made by British military and diplomatic leaders in Afghanistan, ranging from soldiers retreating when they should have won to wildly misreading who among the Afghans was trustworthy. This ultimately led to a disorganized withdrawal bogged down by servants, camp-followers and families, that ended for most of the retreating Brits as corpses strewn across the landscape, though Sale herself made it to safety. A grim study of military ineptitude and some tart-tongued writing. 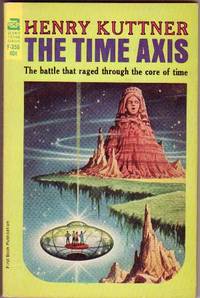 THE TIME AXIS is a very Olaf Stapledon-ish epic by Henry Kuttner in which a boozing journalist doing an article on a high-powered scientist discovers the real purpose of his assignment is to join a team traveling to the end of time and finding a cure for the mysterious indestructible substance slowly taking over the world’s matter. The story that follows (Arnold Schoenberg’s cover captures a lot of it) seems like Kuttner just kept pumping out ideas and throwing them in — mandroids, transporters, time travel, psi-possession — but it worked for me.

Leigh Brackett’s THE BIG JUMP has a protagonist investigating the aftermath of Earth’s first interstellar expedition: what happened to his friend who apparently didn’t come home with the ship? Why is the Solar System’s most powerful corporation covering up what happened on the journey? Learning that something bad happened to the crew, the protagonist deals himself in on the follow-up flight, only to discover their destination holds a threat he hadn’t anticipated. I love the monstrous alien Transuranea but the sexism of this hardboiled SF yarn gets heavy.

CAVE CARSON HAS A CYBERNETIC EYE: Every Me, Every You by Gerard Way, Jon Rivera and Michael Avon Oeming starts poorly: a flashback to a Superman crossover, then some really confusing jumping to parallel worlds for more battles with the Whisperer. Things pick up after they finally land on another world where they join forces with an older counterpart of Cave and Cave Carson Jr. against the bad guys. The end result is not as fun as the first volume, but it’s good enough I’ll try the third and final volume eventually.

2 responses to “The Victorian Past, the Unimaginable Future and parallel worlds”