One winner, two meh in this week’s movie viewing.

The winner was THE CHARGE OF THE LIGHT BRIGADE (1936) which I mentioned in passing Tuesday. Errol Flynn plays the Lancer stationed in fictitious “Suristan” who copes with personal drama — fiancee Olivia de Havilland loves his younger brother! — while warning his superiors that the Suristan king (C. Thomas Gordon in brownface) is not happy they’ve cut off his slush fund and that things could get very dicey very soon … 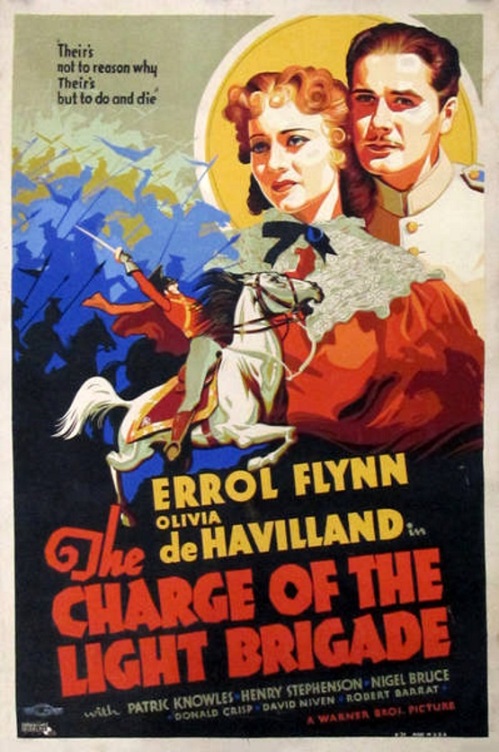 When they don’t listen, the king takes a bloody, treacherous vengeance, then flees to Russia (Britain’s rival in the “great game” of empire). When the Crimean War erupts, Flynn and his Lancers are sent into the thick of things and finally get a chance at revenge — but only by defying their commanding officer to make the eponymous charge.

The real charge was the result of a stupid screw-up, but Alfred Lord Tennyson made it sound epic and heroic in his poem about the battle. This film makes Tennyson look positively anti-war (he did at least acknowledge the blunder) but it’s the kind of old school imperial romance that I get a kick out of, even knowing it’s unhistorical nonsense. Along with Flynn and de Havilland we have Nigel Bruce as a henpecked officer who proves to have the right stuff, Donald Crisp as the man who warns Flynn off ( (“You can’t charge, Vickers — it’s a valley of death!”) and David Niven. There’s also the spectacular final battle, which is truly epic, though aided by the brutal “Running W” for tripping horses (some sources say its use here triggered the animal rights protests that eventually led to abandoning it). “That is why the 27th Lancers has been ordered to Sevastapol.”

Based on W. Somerset Maugham’s Ashenden, the WW I-set spy drama THE SECRET AGENT (1936) works better than Hitchcock’s silent melodramas but that’s not the same as saying it works. John Gielgud plays Ashenden, a novelist/war hero who discovers the Secret Service has faked his death so that he can work undercover tracking an enemy agent carrying vital intelligence back to Germany; Madeline Carroll, who was wonderful as the love interest in The 39 Steps is much less effective as the agent posing as Gielgud’s wife here.

This has some interesting elements such as the protagonists’ growing horror at the ruthlessness of their work, but Gielgud (this is the first time I’ve ever seen him as a young man) feels miscast: he’s stiff and unconvincing and having him and Carroll fall in love comes out of nowhere. Robert Young plays a likeable American and Peter Lorré plays a British-employed killer. “What is this strange power you have over coachmen?

IN ANOTHER COUNTRY (2012) falls even flatter as a Korean woman distracts herself from her troubles by writing three different fantasies about French immigrant Isabelle Huppert showing up in the woman’s small seaside town and having romantic adventures. Way too meandering. “Why Are You So Quiet?”

2 responses to “One winner, two meh in this week’s movie viewing.”