Like so many people, the switch to Daylight Savings Time messes up my body’s clock something fierce. I’d go to bed regular hours, but if I woke up around 3:30, my body would insist it was 4:30 which is too close to 5 AM to go back to sleep. So I’m a little sleep-deprived, again. 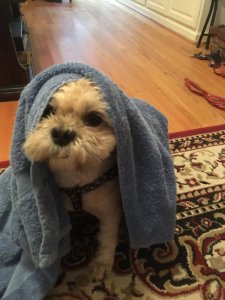 Despite which I had a productive week, making up for the mess of October. And that’s despite Plushie and Trixie insisting an hour before lunch and dinner that Daddy, it’s time to eat, it really is, why are you writing? And having to take Trixie into the vet Thursday for a sore throat. Chihuahuas are prone to collapsing trachea, and hers was acting up (it’s not fatal, but we have to take care of it). We got some drugs, she’s doing fine.

So what did I do, besides my usual quota of Leaf articles?

•I worked on my rewrite of Rabbits Indigneotem. I think my friend Cindy was right that a more upbeat ending works, but it’s still not quite right. I feel it’s close though, so I’ll keep working on it. I think something upbeat but black-humored would be ideal, but that’s tricky.

•Having gotten such a good response to the rewritten Chapter One of Impossible Takes a Little Longer from the writing group, I followed up with the next three chapters. I’d actually already made some changes on them so it didn’t take a huge amount of effort. It’ll get tougher as move forward into terra sort-of incognita.

•I continued rewriting Oh, the Places You’ll Go. I want to either finish the story by the end of the month (if it’s a short) or get 10,000 words in (if it 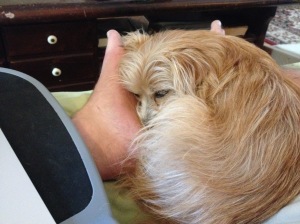 turns into a novel). While I’m keeping the core of the original short story, which is the relationship between the four protagonists, I’ve followed my feedback and put a lot of work into fleshing out the world of people who use maps to time travel.

•I started going through the articles and blog posts I’ve bookmarked for Sexist Myths and incorporating them into the book. It’s going better than expected. I suspect I’ll have to cut some stuff when I finish this draft, because it’s getting pretty damn big.

•I went out to Hillsborough, about 30 minutes from my house, to meet with the new owners of an art gallery there. They’re looking to have someone write some press releases and articles for them; I’m sure they can’t pay what Leaf does, but it would be a fun break and a second income stream, which I haven’t had for a while — and not one that would suck up a huge amount of time, as some projects have.

I’m crunching numbers to figure out what to charge; I’ll get back to them this weekend and we’ll do a trial run article for their opening next week. Good thing I work fast.

•I sent off three short stories to different markets.

Hopefully I can keep up the momentum next week despite a doctor’s appointment. It does feel good to be productive again.