Rom-coms based on dating-advice books: a triple feature

I know of at least a couple of others in this niche genre, such as 1970’s How to Pick Up Girls, but despite that one being available on YouTube, I didn’t have time to go for a quadruple play. 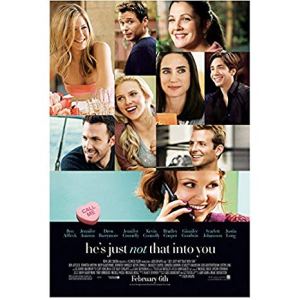 First up, HE’S JUST NOT THAT INTO YOU (2009)was based on a Sex and the City episode that got turned into an advice book based on the principle that if the guy doesn’t call/call back/propose/ask you out, the only possible reason is that he’s not really interested (speaking as a tremendously shy person, I can say that as a universal rule, this is bullshit — though in some cases, certainly it’s true) Ginnifer Goodwin (pre-Once Upon a Time) plays a woman who keeps making excuses for the men in her life (good thing she meets an Obnoxious, Irritating man who can mansplain how things work); Jennifer Aniston reluctantly accepts live-in boyfriend Ben Affleck is never going to propose; Drew Barrymore tries to figure out if guys contacting her by MySpace (wow, does that date this film now) or email are really interested; and Scarlett Johansson tries to steal Jennifer Connolly’s husband away from her.

Much as I disagree with the premise (they do acknowledge, at least a little, that men fall into the same delusion, but not how bad male “no means yes” assumptions can get), I’m also annoyed they don’t follow through on it: Goodwin turns out to be an exception to the rule, Afleck pops the question after all. The Connolly/Johansson triangle doesn’t even fit the theme because “he’s cheating on you” is not the same thing. A great cast, but a poor production. “I miss the days when everyone had just one phone number and one answering machine and one tape for messages.”

THINK LIKE A MAN (2012) worked a little better for me as this adaptation of Steve Harvey’s how-to-land-a-man guide sticks to the basics in its ensemble’s romantic dilemmas: can a woman win a mamma’s boy away from his mom? Will the player in the group be brought to heel if his new woman withholds sex? The battle of the sexes that results is stereotypical, but more entertaining, though the product placement for Harvey’s book is about 100 times less subtle (so many people turn out to have copies, you’d think it was outselling the Bible) “She’s trying to push me towards my dreams and help me accomplish your goals — why would she do that?” 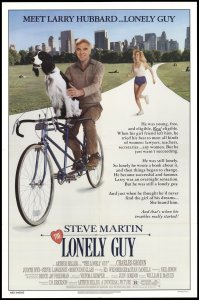 THE LONELY GUY (1984) works best of the three because it’s a)starring Steve Martin and Charles Grodin; b)it’s partly written by Neil Simon; c)the source book is a parody of the single life so it doesn’t have any message to put. Getting dumped by girlfriend Robyn Douglass leaves Martin talking to ferns, contemplating suicide, adopting dogs, trying to win over commitment-phobic Judith Ivey (“You’re all right for me — that’s why you’re all wrong for me.”)and bonding with lonely schlub Grodin. This is hit or miss (the sneezing-as-orgasms scene fell very flat for me, for instance) but overall very funny; Joyce Brothers and Merv Griffin play themselves. “I think I can say, without undue modesty, that I am an expert on dog poop!”

2 responses to “Rom-coms based on dating-advice books: a triple feature”