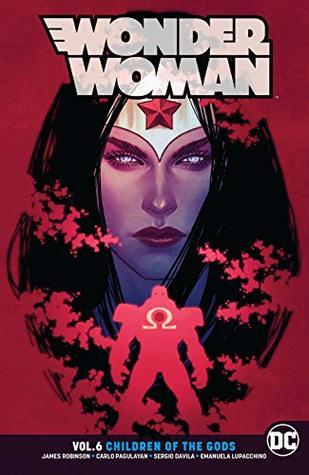 James Robinson will always have a spot in the comics hall of fame for his work on Starman in the 1990s. His recent run on Wonder Woman (with various artists; Jenna Frison does the TPB cover) does not burnish his reputation. Admittedly I’d already read Tim Hanley at Straitened Circumstances‘ negative reviews of this arc when I picked this up at the library, but even without that influence, the best this book would get was “meh.”

Following Darkseid’s defeat in The Darkseid War,  his part-Amazon daughter Grail has been killing Zeus’s children to restore him to full power. She opens with Hercules, now living quietly as a lumberjack in the northwest, then goes on to other progeny, mostly made up for this story, all butchered in one panel or off-panel. That puts not only Diana in her sights, but Diana’s twin brother Jason, given up by Hippolyta years ago. Hercules tells Diana about her brother and asks her to find him. They instantly connect but oh no, he’s secretly pissed about having been given up and he’s working with Grail! The two women battle, Jason decides he can’t let his sister die after all, Darkseid and Zeus show up and Darkseid kicks Zeus’s butt. But the JLA shows up and having lost to them before, he takes a powder.

As Hanley points out, Greg Rucka retconned out Diana’s early New 52 adventures, including the reveal about Zeus as her daddy, so why is she still a demigod? My guess would be because this arc came out after the movie, which made Diana Zeus’s daughter, but I don’t know for a fact. I also wonder if the reason we got this plotline (which runs up through #50 I believe) is because Jason was the brainchild of DC big dog Geoff Johns so it just had to be worked into WW’s story (I’d have sooner see them use Nubia or make up a new twin sister)

As Hanley also points out, this arc has remarkably little of Wonder Woman herself. One issue is devoted to Grail’s backstory. Another does the same to Jason. Although Starman did a lot of flashback issues and did them well, they focused primarily on Starman (several different bearers of the name) and the Shade (one of the more memorable supporting characters). Here we’re focused on two guest stars, and not terribly interesting ones. I don’t find Jason as awful as some people do, but he’s not a memorable character and neither is Grail.

Robinson does show us a dynamic, formidable Wonder Woman, but he doesn’t show us her enough. The character bits among the supporting cast are good, but they’re just supporting cast. And the story’s just dull. It might have been fun to see Zeus’s diverse kids, but killing dozens of people off camera is par for the course for a villain these days. There’s no real drama between Jason and Diana. And Darkseid might as well be Mongul or Thanos or any other space conqueror; there’s nothing to make me care that he’s the adversary.

Thank you Durham Library for saving me from having to buy this.