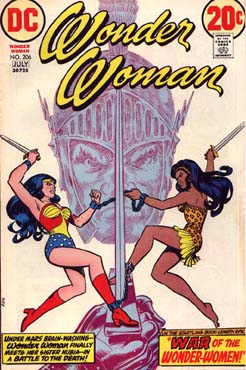 So as I mentioned in my previous WW post, Robert Kanigher rebooted Wonder Woman when he took over in 204: she gets her powers back; I Ching is dead; the Amazons are back (without explanation) from the other dimension where they disappeared to at the start of Diana’s non-super period; Diana’s working at the UN and moves in with two women, one black, one Chinese. Plus she meets a black Amazon, Nubia, who challenges her for the right to the “Wonder Woman” title (cover by Nicholas Cardy, all rights to current holder).

All of this was less of a shakeup than it seemed. The following issue introduces UN trouble-shooter Morgan Tracy who becomes the focal point of a triangle with Diana and Wonder Woman (Diana is her own rival!), duplicating the dynamic with Steve Trevor in the late Silver Age WW stories. Like those issues, Kanigher imports some romance-comics tropes. At one point, for instance, Diana’s sexist boss sneers at her as a plain Jane who hates men, pretty women and herself because she’ll never get a man. As the words “plain jane” sink in, Diana tells herself they don’t matter, but then tears trickle down her face … (there’s no way WW ever doing that would work for me, but it doesn’t help that Don Heck draws Diana as a complete cutie ).

In issue 206, Wonder Woman learns Nubia is her sister, a second clay child sculpted by Hippolyta, but kidnapped by Mars and trained for evil. Diana frees her from Mars’ spell, and that was the last we saw of her except for a brief appearance several years later in the Super-Friends comic-book (too bad, she could have beaten Storm as the first black super-heroine at the Big Two). And then the following issue, everything changed again. For several issues Kanigher just recycled his WW scripts from the late 1940s, with new art by Ric Estrada. I have no idea why—did Kanigher get overextended, did he get bored, or did he just figure these would sell as well as something new? This has the jarring effect that Steve Trevor shows up alive and well (I didn’t realize this was an issue at the time as I hadn’t been reading the series back when Steve died).

Finally with #212 (cover by Robert Oksner all rights to current holder), scripter Len Wein brought all this into some coherent shape. After running into Clark Kent, Diana asks why she hasn’t received any JLA

communications lately, and Clark realizes she doesn’t remember quitting, or losing her powers (this is driven home by her trying to meet the team at their old mountain-top HQ rather than the then-current satellite).  When the JLA invites her to re-up, Wonder Woman refuses for fear she might lose her memory in the middle of a fight or something. Instead she suggests Twelve Trials, like Hercules: the League members will monitor her next 12 missions to see if she performs satisfactorily.

Diana confronts her mother, who admits that when Diana came down with amnesia in #204, the Amazons couldn’t restore her memories from the period they were absent so they made up some adventures to fill the gap (hence Steve apparently being alive). Diana’s pissed her mum did that without asking, plus she now knows Steve is dead. It’s not a good day for her.

Over the rest of the issue, Diana moves to a new apartment (we don’t see her two former roommates, though she mentions them—and they never even got names!), goes to work for Morgan Tracy (no longer treated as a possible boyfriend) as a troubleshooter for the UN Crisis Bureau) and as Wonder Woman, saves Tracy from the Cavalier (apparently the Earth-One version of the 1940s Bat-villain). I enjoyed the story and I’m more impressed by Wein pulling everything together so well (as the letter column notes now we get a heroic Diana Prince a la the powerless period alongside the classic Wonder Woman).  The new status quo lasted three years, then switched to new WW II adventures to fit up with the Lynda Carter TV Wonder Woman. A year later the comic, like the show, returned to the present; Diana stayed at the UN until 1980 (after which she’d get rebooted a lot more).