For whatever reason I kept waking up early this week. Even on nights I took something to keep me asleep. I take naps to compensate and the one flaw in the new furniture is that the new chair and love seat aren’t quite long enough for me to stretch out and sleep comfortably. Instead I have to take the dog upstairs to the bed, which doesn’t always work — they bark, or start climbing over me. They do quiet down over time, but when I nap I go to sleep instantly, usually while they’re still fidgety.

That said, I still had a good, productive week (one advantage of writing is that I can always do it in the middle of the night). I worked on No One Can Save Her and I think I have the plot problems solved; hopefully when I look at it next week, I won’t see any flaws I skipped over. I worked on several other short stories, including a redraft of Only the Lonely Can Slay, did a couple of Leaf articles, and started replotting The Impossible Takes a Little Longer. And I got a few thousand words done on Undead Sexist Cliches: the Book. While I’m not working on Southern Discomfort until I print it and read it aloud next week, I did work on the query letter (done) and the synopsis (needs more work).

Depressingly I’m wondering whether Schloss and the Switchblade doesn’t need another revision to stay up with current events. I changed it once because after Charlottesville last year, seeing Nazis would produce a much more shocked reaction in Ward, my protagonist. Now that we’re getting increasingly blatant anti-Semitism on the right I’m still not sure it’s enough. Inconvenient to me, but obviously trivial in the grand scheme of things.

After getting 52 percent on my goals for September, I rose up to 62 percent for October despite taking a week for my trip to Florida, I’d have done better, but several of my goals came in at the near-miss level: Almost completely done with Southern Discomfort. Completed five out of six daily-life projects, like getting PMI taken off our mortgage. Eating more fruit and veggie-based meals (even though I’m a vegetarian, I don’t always go with green vegetables). And I finally added a PayPal donation button to the sidebar. I won’t be announcing fund drives or anything, but I figure making the option available can’t help. In the words of countless supervillains robbing charity events, the donations will go to my favorite charity — myself! 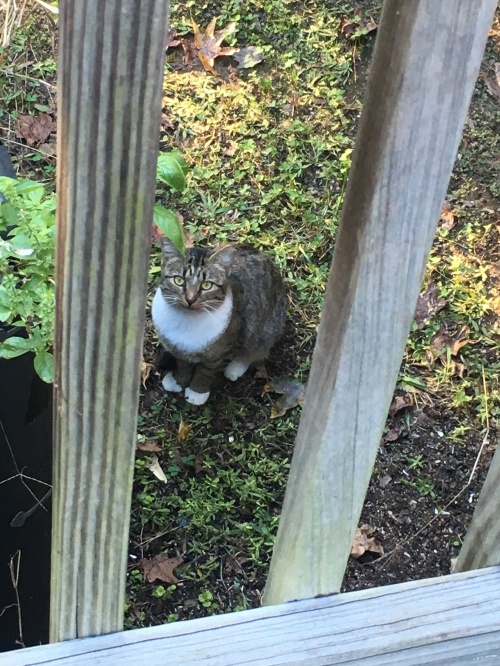 Since I took over feeding Wisp, her dinner has been on a regular schedule and she knows it. Frequently I find her waiting on the deck, from which she retreats to the foot of the deck stairs until I set the food down. Thursday, I put it out about a half hour late and found her staring at me with disapproval and sorrow. Then I gathered up some of the old bowls and walked through the back yard to dump them in the trash. Wisp did not take this departure from routine at all well; she ran and hid under the shed in the back, and it took her several minutes watching before she decided she could eat without me infringing her personal space again. She’s getting used to us, but she’s definitely still feral.

Monday, I did my friends Celena and Eric (a few houses down our cul-de-sac) a favor and helped them introduce Tito, their new toy poodle, to their dog Lily. Tito is three years old and full of energy, darting everywhere, marking the street every few steps. He has a weak back leg but he just tucks it up like a bird and runs on three. I’m hoping he becomes a new friend for Trixie and Plush Dog too.

#SFWApro. Image is mine.