A bad baronet, a bad novel, Dr. Mabuse and Black Lightning: the rest of my week’s media 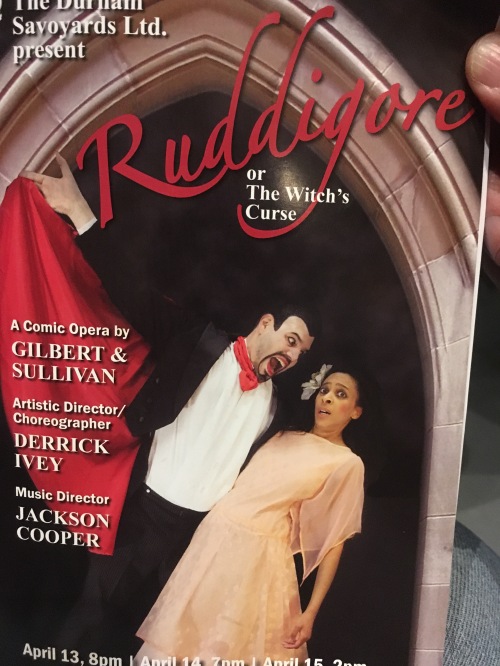 RUDDIGORE was Gilbert and Sullivan’s parody of then-stock stage melodrama elements, but it works even if you don’t know or care about the prototypes they made fun of (the orphan who looks to the Bible for guidance is here an orphan who looks for it in an etiquette book) it’s still very funny. A young farmer romances sweet orphan Rose, concealing that he’s the rightful heir of the bad baronets of Ruddigore, who are compelled to do evil every day or die in terrible agony. But when his rival in love exposes him, he must assume the accursed title … A great job as always with the Durham Savoyards, but it had some serious sound problems (one of the actors was almost inaudible and we were in the second row). “I sometimes think that if we could hit upon some word for you to use whenever I am about to relapse – some word that teems with hidden meaning like “Basingstoke” – it might recall me to my saner self.”

I like John Brunner and the text on Jeff Jones cover for BLACK IS THE COLOR promised an interesting yarn (voodoo in 1960s Swingin’ London!). Unfortunately, the story of a dissolute twentysomething who stumbles into an international conspiracy (South Africa plans to have a black militant commit a terrorist act, figuring Britain will stop condemning them for apartheid) goes with the theory voodoo is psychosomatic (it kills people because they believe it) which isn’t as interesting as real magic (and the ending reveal Maybe It’s Real is just trite). And while Brunner’s trying to avoid it, he ends up embracing the Superstitious Darkie cliche. Overall, a very talky, slow book, and any sixties spy show could have made better use of the premise.

THE RETURN OF DR. MABUSE (1961) — was the first Mabuse film not made by Fritz Lang, and it’s surprisingly good. Police inspector Gert Frobe gets pulled off vacation to investigate a US organized-crime plot to ally with a crime kingpin in Germany (US B-actor Lex Barker plays his first role in the Mabuse series here). Could it be a certain evil genius survived his previous film? As Gert Frobe digs deeper he discovers mysterious crimes, mysterious beggars and a suspicious prison before getting to the truth (which involves a mind-control drug, the series’ first shift into SF). Better than I remembered it. “The devil doesn’t pray — on the contrary, he wants to be prayed to.”

BLACK LIGHTNING was the CW’s newest superhero show, though taking place on a separate Earth from Supergirl’s or Flash’s. Jefferson Pierce (Cress Williams) is a retired superhero, happy to make the high school he runs the focus of his world-saving efforts. But when the 100 crime cartel kidnaps his daughters, Jefferson is forced to go back into the field — and of course, can’t quit once he does. Like Luke Cage this is a very black show, but it also stands out from the crop by making Jeff a family man whose two daughters are just discovering their own meta-powers; that opens up storytelling angles that Oliver’s fatherhood this season on Arrow simply can’t deliver. I could have done without Tobias Whale as the evil albino (he’s that in the comics, but albinism=evil is a stereotype), but overall a very satisfactory season. “The devil deals the cards.”

3 responses to “A bad baronet, a bad novel, Dr. Mabuse and Black Lightning: the rest of my week’s media”