THE FOUR MUSKETEERS (1974) is, of course, the sequel to The Three Musketeers in which Oliver Reed remembers the girl who got away, Raquel Welch enters a convent, Faye Dunaway’s maid informs her Michael York didn’t come (his reaction always makes me laugh) and Dunaway proves even Puritans succumb to her charms. Slightly less slapstick than the first film, with a much darker ending, but also a climactic duel (Christopher Lee vs. York) in which it looks like the fighters are actually feeling their wounds. That said, the story of Milady’s past (which is true to Dumas) makes me wonder if anyone’s ever written her as more sinned against than sinning (i.e., she might have reformed had Athos been more supportive). All rights to image remain with current holder. “He marches to Paris, to the bed of his queen—his lascivious Roman queen!” 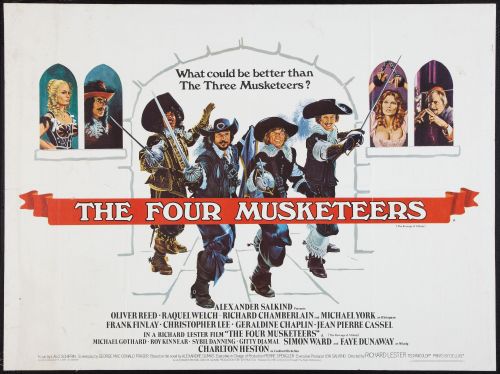 LOGAN (2017) stars Hugh Jackman as the aging, dying Wolverine in a world where mutants have largely vanished. Spending his days trying to help out the addled, dying Xavier (Patrick Stewart, who gets to swear in this one), Logan then has to assume the added burden of protecting his clone daughter X-23 from the corporation that created her. Very good, though with several loose ends (one mad scientist claims to have a prior connection with Logan but it’s not really explained) and the ending doesn’t entirely make sense (Transigen will commit murder and slavery, but draws the line at illegally crossing the Canadian border?). Given the heavy parallels with Shane, that movie would be the logical double-bill.  “Now let’s not bring out the worst in each other, okay?”

AMERICA 3000 (1986) is a typical Cannon Films SF product of the day, set in a post-apocalyptic future America where barbarian women with good hair and eye makeup rule over men (who also have great here) reducing them to breeders or manual laborers. Then a runaway male discovers a lost military base and uses the tech to present himself as the prophesied “president” who will save the world. I’ve seen more sexist versions of woman-ruled futures but that’s not saying this was any good.  “I believe the legend, great president, that you have come to lead us into tomorrow.”