NOTHING (2003) is an oddball fantasy film in which two loser Dioscuri facing the loss of their home somehow wish reality away, leaving their house stuck in a white void which could turn out to be their heaven if they don’t kill each other first. Not for the book, but surprisingly entertaining—David Thewliss plays one half of what’s essentially a two-man show. “Do you suppose videogame characters want to be on hold in that moment for eternity?” 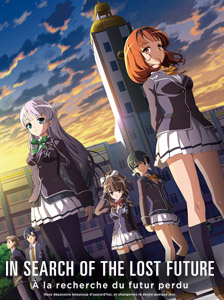 IN SEARCH OF THE LOST FUTURE for about two-thirds of its 12-episode run kind of bored me, as a story about Japanese high schoolers and their comic misadventures really isn’t my cup of tea. However after one student suffers a car accident that plunges her into a coma it sets up a series of desperate time trips to fix things. Not an A-list anime from my perspective but the last third is certainly powerful (all rights to image with current holder). “I stood against the chains of fate, which connected time!’

DOCTOR WHO: Last Christmas was the 2014 Christmas special, in which Santa Claus reunites the Doctor and Clara to fight against menacing mind-parasites—but when alien invaders can manipulate your perceptions, is anything what it seems? A fun one. “You have a horror movie called Alien? That’s so offensive—no wonder everyone’s always invading you.”

APP (2013) has a young Dutch girl finding Malware of Doom on her phone with the usual Killer Computer propensity for eliminating her friends when they get in the way of its agenda. Formulaic, but competent enough to enjoy, though a couple of kills are too implausible. “This was never supposed to be about you.”

ELECTRIC BOOGALOO: The Wild, Untold Story of Cannon Films (2014) is an excellent documentary about how the top dogs in 20th century Israeli cinema also became the kings of exploitation films for a decade or three, whether via violent actioners or borderline porn (“After I left the scene, that’s when all the fucking started.”). Golan and Globus are certainly familiar types in film history (as are the stories of marketing movies before making them or racing to put a movie into the theaters ahead of the competition), though unlike many exploitation-cinema kings, the duo had serious pretensions to the big leagues (so along with the Death Wish films, their output includes films by Francisco Zefferelli and John Cassavetes). The documentary argues their efforts were doomed by everything from Hollywood snobbery for Crass Jewish Outsiders to bad financial judgment (so that even when films proved profitable, they’d just overspend by that much more). Well worth catching. “DEATH WISH 3 through 5 are related by family, but they’re the part of the family we don’t talk about.”

Filed under Movies, Now and Then We Time Travel, TV

3 responses to “Good time travel (and other) tales (#SFWApro)”