Archenemies: the need for a nemesis (#SFWApro)

Blogging about the Archie Comics version of The Shadow got me thinking about how heroes having a nemesis seems much more important today than it used to be.

As Section 244 noted in review that Shadow, Shiwan Khan was the Shadow’s arch-enemy in the pulps … but that only amounted to four out of more than 300 pulps. Archie used him in seven out of eight issues. DC’s The Shadow Strikes made him the main adversary of the run, and emphasized that he and the Shadow came from the same school of mystic secrets (as did the Alec Baldwin The Shadow film). 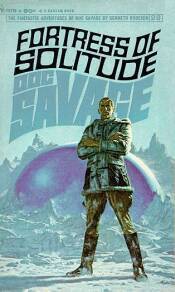 Doc Savage faced John Sunlight only twice, but almost every comics adaptation since has used him. He even turns up in Roger Zelazny’s Roadways, though without formally acknowledging who it is (cover by James Bama, all rights to current holder)

The Stygian sorcerer Thoth-Amon appears in the background of the first Conan story, The Phoenix on the Sword, and plays an even more shadowy role in The God in the Bowl. He never met Conan, never targeted Conan, but in the Lancer series of Conan novels, he was elevated to mortal enemy. And he’s played a correspondingly large role in the Cimmerians’ comics adaptations. Likewise Thulsa Doom, who appeared in one of Robert E. Howard’s King Kull stories, became a running foe in later versions.

Heck, even Professor Moriarty only appears in two Sherlock Holmes stories (The Final Problem, Valley of Fear). He (or variant versions of him, for example in the Cumberpatch Sherlock), play a much bigger role in later writers’ hands — the early 20th century Arthur Wontner film series, for example (one of the first Definitive Holmes) used him in multiple movies.

Part of this, of course, is the same reason we enjoy continuations of series (James Bond, Sherlock Holmes) long after the creator has passed on. If a character’s good, we want to see more of them.

But I also wonder if this isn’t some sort of cultural shift, though I’m not sure what or why. After all, it’s now routine for TV cop shows to give homicide detectives a nemesis in the form of some particularly nasty killer. In addition to the ones at the link, the CW’s TV series of Frequency turns the Nightingale Killer into the same sort of arch-foe.

So does this indicate anything significant? And if so what? Or am I just following the human tradition of seeing patterns that don’t exist?

3 responses to “Archenemies: the need for a nemesis (#SFWApro)”