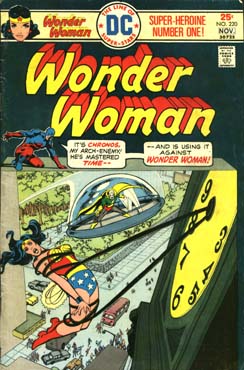 So after my last post on Wonder Woman, I thought I might as well continue posting as I work through her adventures. It’s relatively easy as DC kept soft-rebooting her over and over, so there are obvious stopping points.

When we last left the Amazing Amazon she’d recovered her powers and become an agent of the United Nations Crisis Bureau. She’d also volunteered to undertake twelve trials, monitored by the JLA, from Superman to the Atom (cover by Dick Giordano, all rights to current holder) to see if she was still qualified as a member.

The stories ranged from bad (the Dr. Cyber story I referenced a while back) to really good (the Atom story) with most of them hovering around the median (as I’ve mentioned when reviewing current comics, I’m under no illusion that mediocre stories are a new thing) The various writers included Cary Bates, Elliott S. Maggin and Martin Pasko, who become the regular WW writer. One story, by Maggin, answered the question of why men were forbidden on Paradise Island and did so pretty well. Another story by Maggin, otherwise amusing, equated “feminism” with “women opening doors for men” which is silly, but it does show how unconventional such little acts or the woman paying for dinner were seen  at the time)

Under Pasko, Diana Prince shifted from the Crisis Bureau to a more bureaucratic job on the diplomacy side. This was meant to be a case of institutional sexism — the Crisis Bureau’s new boss doesn’t think a woman can do the job — but as it was never explained except in a later letter column, that didn’t have any punch.

Then the trials wrapped up, Wonder Woman rejoined the JLA — and in Wonder Woman #223, Hippolyta got pissed. Angered that mere men were judging her daughter’s fitness, she stages an attack on Paradise Island to make that judgment herself — and as part of the adventure, Steve Trevor, Diana’s murdered lover, returns to life.

This was quite a shock. Back then the good guys in comics didn’t die often, but when it happened they didn’t come back, not from a death as fatal as Steve’s (it’s hard to fake getting shot through the chest multiple times). Yet through Aphrodite’s magic and Diana’s pleading here he was, alive again.

Pasko obviously had some ideas for where this would go. Steve has to adjust to a world that’s moved on for the seven years since Dr. Cyber killed him. He’s determined to stand on his own two feet and not be just an appendage to his girlfriend (“Wonder Woman’s Lois Lane” as comics writer Trina Robbins once described him). That includes barging into the HQ of S.O.S. — Spy on Spy, an organization that monitors other espionage groups on behalf of the president — and becoming one of their agents. But whatever plans Pasko had proved moot when Lynda Carter’s The New Original Wonder Woman hit the airwaves. For the first season it was set in WW II, so the comic book, as of WW #228, likewise shifted to WW II. A time-traveling Nazi from the parallel world of Earth-Two (long established as where DC’s 1940s super-hero stories took place) lands on Earth One and drags Diana back with him. She meets her Earth-Two counterpart, then returns to her own time and place; we stay behind with the WW II version. Synchronization with TV accomplished.

And so that’s the material with which I’ll deal next time.