Other than Terminator: Genisys which I caught last weekend.
REPEATERS (2010) puts the ethical question of time-loop films — does it matter what you do if the loop just erases it? — front and center. Three twentysomething addicts assigned to make peace with those they’ve wronged decide to just blow their assignment off, only to discover that they can’t get past the day. One of the trio decides this is an awesome deal (he can try crack, kill, rape a 15-year-old) and has no wish to end it, while another keeps hoping that doing the right thing is the way to go even if good deeds get erased too. Surprisingly good. “I just pissed in my pants—that has to mean something, doesn’t it? 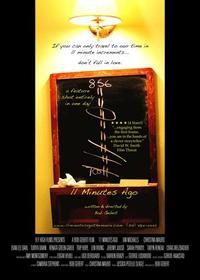 11 MINUTES AGO (2009) is a charming rom-com in which a scientist visiting the present from 48 years ahead is surprised to land in the middle of a wedding reception, more surprised that everyone there already knows him, and some of them know he’s a time traveler. Given that it takes him months to prep for a single 11-minute jump, why on Earth would he have come back to earlier in the evening. Could it have anything to do with the bride’s sexy friend who clearly knows him very well indeed? I saw the ending coming, but that doesn’t make this any less winning (though the time traveler knowing everything about the female lead when they met screamed more Crazy Stalker than Charming Eccentric). “Balloon animals are the perfect combination of art and snowflakes.”

Moving over to TV, DOCTOR WHO: The Invasion has the Doctor, Zoe and Jamie arrive in near-future England where sinister electronics manufacturer Tobias Vaughn (Kevin Stoney) who turns out midway through to be allying with the Cybermen in the optimistic belief he’ll end up in control of Earth once they attack. Constrained by its budget at times (the scenes of the Cybermen stalking London were effective, but Dalek Invasion of Earth had a more epic feel to it) this was a landmark for introducing UNIT, the task force headed by Brigadier Lethbridge-Stewart, introduced himself in the earlier Web of Fear. While UNIT would go on to define the Third Doctor’s era, this was the last Cyberman story until the Fourth Doctor tale Revenge of the Cybermen. “If there’s trouble around, the Doctor and Jamie are certain to step into it.”

The second season of AVENGERS: Earth’s Mightiest Heroes squeezes in a lot of big-name story arcs from the comic, including the Secret Invasion, the 1980s Operation Galactic Storm, the coming of Galactus and the Surtur story from Walt Simonson’s Thor run (only the opening story with Beta Ray Bill). It also resolves the time paradox Kang attacked the Avengers to prevent during the first season. Entertaining, though ending with Galactus was actually a bit anti-climactic (as they’d just stopped the Kree from blowing up the sun the previous two episodes, Galactus blowing up Earth doesn’t up the game as much as they insist). “I never thought about history much because I never imagined myself not being around.”

Filed under Movies, Now and Then We Time Travel, TV